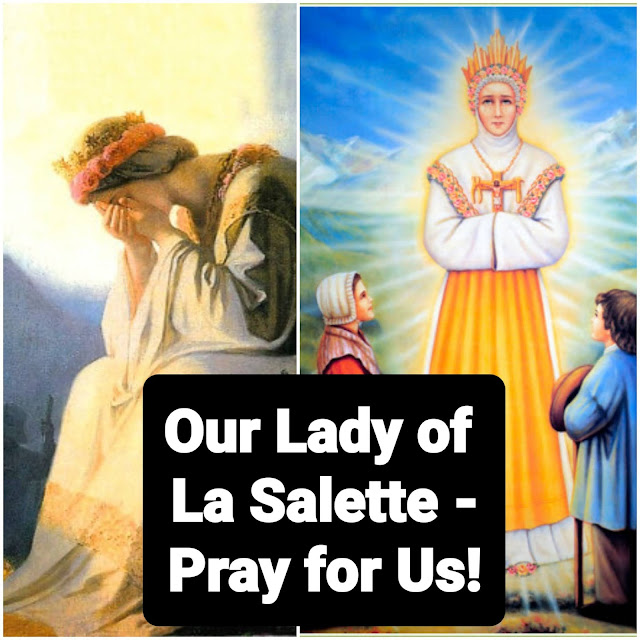 La Salette, France: Apparitions of Our Lady of La Salette whose Feast Day is September 19th.  It is the 175th anniversary of these approved apparitions.
The story of La Salette:
The village of La Salette is in the French Alps not far from Grenoble. On Saturday afternoon, September 19, 1846, Maximim Giraud, a boy age 11 and Melanie Mathieu-Calvat, a girl age 14, were attracted to a brilliant light in a ravine.

She spoke first to both of them, then gave each a ‘secret’ individually. After a final admonition to both to ‘make this known’ she rose in the air looking heavenward in joy, glanced momentarily toward Rome, and then gradually disappeared. Melanie and Maximim told their fellow townspeople of the vision, but met with initial unbelief (with the exception of Fr. Perrin, the parish priest, who announced the event during Mass). (Biography continues below prayer)
PRAYER: Remember, dear Lady of La Salette, true Mother of Sorrows, the tears which thou didst shed for me on Calvary; be mindful also of the unceasing care which thou dost exercise to shield me from the justice of God; and consider whether thou canst now abandon thy child, for whom thou hast done so much. Inspired by this consoling thought, I come to cast myself at thy feet, in spite of my infidelity and ingratitude. Reject not my prayer, O Virgin of reconciliation, convert me, obtain for me the grace to love Jesus Christ above all things and to console thee too by living a holy life, in order that one day I may be able to see thee in Heaven. Amen.