Pope Francis says "More than enough food resources are produced to feed 8 billion people. The question, however, refers to social justice, that is, to the way in which the management of resources and the distribution..." 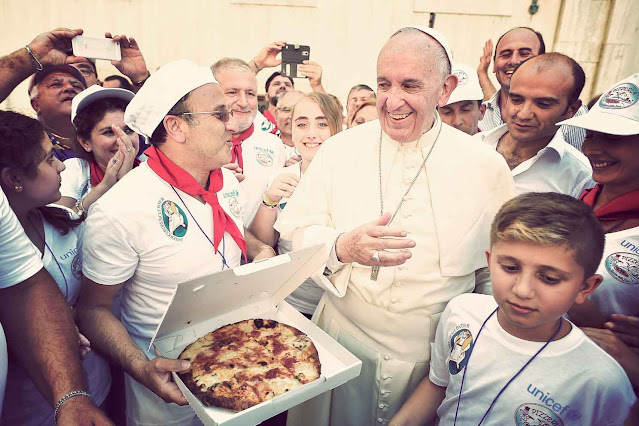 MESSAGE OF THE HOLY FATHER FRANCIS
ON THE OCCASION OF THE INTERNATIONAL DAY OF AWARENESS OF LOSS
AND FOOD WASTE 2022
[September 29, 2022]
To Your Excellency
Mr. Qu Dongyu
FAO Director-General
Excellence:
I cordially greet the participants in the celebration of the International Day of Awareness of Food Loss and Waste. I am grateful for the space that has been given to me in this event, which aims to highlight the seriousness of a problem that we cannot ignore in this difficult time we are experiencing.
When food is not used properly, either because it is lost or wasted, we are at the mercy of the "throwaway culture", which translates into a manifestation of disinterest in what has a fundamental value or attachment to what lacks of importance. Knowing that multitudes of human beings cannot access adequate food or the means to procure it —this being a basic and priority right of every person—, seeing food thrown away in the garbage or deteriorated due to the lack of the necessary resources to make it reach your recipients is really embarrassing and worrying.
Both the loss and the waste of food are truly deplorable facts because they divide humanity between those who have too much and those who lack the essentials, because they increase inequalities, generate injustices and deny the poor what they need to live with dignity.
The cry of the hungry, deprived in one way or another of daily bread, must resound in the centers where decisions are made. And it cannot be silenced or suffocated by other interests, considering that the latest data from the Report on the State of Food and Nutrition Security in the World (SOFI 2022) reveals that last year the number of hungry people on our planet increased significantly due to the multiple crises facing humanity. So, let me repeat it, it is necessary to “collect to redistribute, not produce to disperse” (Speech to the members of the European Federation of Food Banks, May 18, 2019). I've already said it in the past, and I won't get tired of insisting, throwing away food is throwing away people!
The entire international community must mobilize to put an end to the unfortunate “paradox of abundance”, which my predecessor Saint John Paul II denounced with clairvoyance thirty years ago (cf. Speech at the opening of the International Conference on Nutrition, December 5 1992). In the world there is the necessary food so that no one goes to bed on an empty stomach! More than enough food resources are produced to feed 8 billion people. The question, however, refers to social justice, that is, to the way in which the management of resources and the distribution of wealth are regulated.
Food cannot be the subject of speculation. Life depends on them. And it is a scandal that the big producers encourage compulsive consumerism to get rich, without even considering the real needs of human beings. Stop food speculation! We must stop treating food, which is a fundamental good for all, as a bargaining chip for a few.
On the other hand, food waste or loss contributes significantly to the increase in greenhouse gas emissions and, therefore, to climate change and its harmful consequences. The land that we avidly exploit groans because of our consumerist excesses and implores us to stop mistreating and destroying it by reversing the course of our actions. Young people, above all, are strongly asking us to think of them, to sharpen our gaze and enlarge our hearts, giving the best of ourselves to take care of the common home that came out of the hands of God and that we must safeguard, responding with good deeds to the evil we caused.
In this matter of such magnitude, we cannot be satisfied with rhetorical exercises, which end in declarations that later fail to be carried out due to forgetfulness, pettiness or greed. It is time to act urgently and seeking the common good. It is urgent for States as well as for large multinational companies, for associations as well as for individuals —for everyone without excluding anyone—, to respond effectively and honestly to the heartbreaking cry of the hungry who demand justice.
Each one of us is called to reorient his lifestyle in a conscious and responsible way, so that no one is left behind and everyone receives the food they need, both in quantity and quality. We owe it to our loved ones, to future generations and to those who find themselves hit by economic and existential misery.
May Almighty God bless your work, for the benefit of all mankind.
Vatican, September 29, 2022
Source: Vatican.va