Saint September 12 : Feast of the Holy Name of Mary the Mother of Jesus - Biblical Explanation and Meaning of the Name of Mary 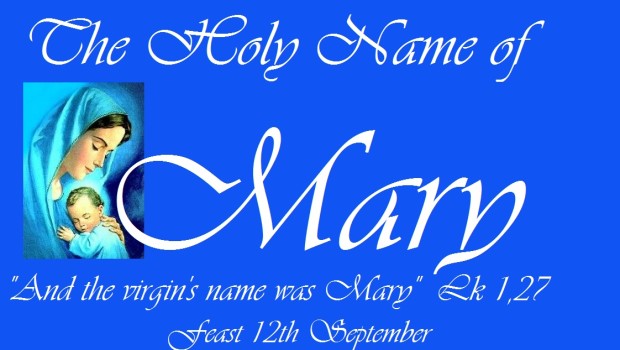 The new liturgical calendar lists the feast day of the Holy Name of Mary as an optional memorial.

In Hebrew, the name Mary is Miriam. Derived from the root, merur, the name signifies "bitterness." It also is translated as "Star of the Sea, "  as a contracted form of the Hebrew ma'or "star" plus yam "sea".   Spelling variants include Mariam,  Myriam,  Mirjam,  Mirijam,  Mira,  Miri,  Mia,  Mimi,  in Greek and Latin; Maria,  in French; Marie and in English; Mary.

In the New Testament we learn Mary's name in the Gospel of Luke chapter 1.

Miryam was the name of the sister of Moses; and the ancient rabbinical scholars perceiving in it a symbol of the slavery of the Israelites at the hands of the Egyptians, held that Miryam was given this name because she was born during the time of the oppression of her people.Miryam, the sister of Moses is a "type" of the Blessed Virgin. Miryam was a prophetess who sang a canticle of thanksgiving after the safe crossing of the Red Sea and the destruction of Pharaoh's army; Mary prophesied in Her Magnificat that all generations would honor Her, and She sang of how God would topple the proud and raise the lowly. Miryam supported her brother, Moses, the liberator of his people; as the Co-Redemptrix who united Her sufferings to those of the One Mediator on Calvary, Mary labored alongside the Redeemer, the true Liberator of His people. Just as Jesus was the "antitype" [i.e., fulfillment] of Moses, so was Our Lady the "antitype" of Miryam.

In 1513, a feast of "The Holy Name of Mary" was granted by Papal indult  [Pope Julius II] to the diocese of Cuenta in Spain. It was assigned with proper Office on September 15, the octave day of Our Lady's Nativity. With the reform of the Breviary undertaken by Pope St. Pius V, the feast was abolished, only to be reinstituted by his successor, Pope Sixtus V, who changed the date to September 17. From there, the feast spread to the Archdiocese of Toledo [1622] and, eventually, to all of Spain and to the Kingdom of Naples [1671].SEE ALSO:

https://www.catholicnewsworld.com/2020/09/litany-to-holy-name-of-mary-and-special.html Throughout this time, permission to celebrate the feast was given to various religious orders in a prudent manner as has been the custom throughout Church history regarding feast-days, their dates, offices, liturgical expression, etc. However, this Feast of the Holy Name of Mary would one day be joyfully extended to the Universal Church, and this on account of rather dramatic circumstances involving one of Poland's great military heroes, John Sobieski [1629-1696].While acting as field-marshal under King John Casimir, Sobieski had raised a force of 8,000 men and enough provisions to withstand a siege of Cossacks and Tartars, who were forced to retire unsuccessfully and at a loss. In 1672, under the reign of Michael Wisniowiecki, Sobieski engaged and defeated the Turkish army, who lost 20,000 men at Chocim."To the same Heavenly Queen, on Clear Mountain, the illustrious John Sobieski, whose eminent valor freed Christianity from the attacks of its old enemies, confided himself."
[Letter, Cum iam lustri abeat, 1951]In September, the men joined with the German troops under John George, Elector of Saxony, and Prince Charles of Lorraine. On the eighth day of the month, the Feast of the Nativity of Mary, Sobieski prepared himself for the ensuing conflict by the reception of Holy Communion.Battle was engaged before the walls of Vienna on September 12, 1683, with Sobieski seemingly put to flight by "the fierce Turkish forces. However, this retreat was a minor setback only. The Hussars renewed their assault and charged the Turks, this time sending the enemy into a retreat. The combat raged on, until Sobieski finally stormed the enemy camp. The Turkish forces were routed, Vienna was saved, and Sobieski sent the "Standard of the Prophet" to Pope Innocent XI along with the good news. In a letter to the Pontiff, Sobieski summed up his victory in these words: Veni, vidi, Deus vicit -----"I came, I saw, God conquered!" To commemorate this glorious victory, and render thanksgiving to God and honor to Our Lady for their solicitude in the struggle, Pope Innocent XI extended "The Feast of the Holy Name of Mary" to the Universal Church. Although the feast was originally celebrated on the Sunday after the Nativity of Mary, Pope St. Pius X [+1914] decreed that it be celebrated on September 12, in honor of the victory of the Catholic forces under John Sobieski. The history of this feast reminds us in some ways of that of "Our Lady of the Rosary," which was instituted to celebrate and commemorate the victory of the Catholic forces over the Turkish navy at the Battle of Lepanto in 1571: "And thus Christ's faithful warriors, prepared to sacrifice their life and blood for the welfare of their Faith and their country, proceeded undauntedly to meet their foe near the Gulf of Corinth; while those who were unable to join them formed a band of pious supplicants, who called on Mary and, as one, saluted Her again and again in the words of the Rosary, imploring Her to grant victory to their companions engaged in battle. Our sovereign Lady did grant Her aid." [Pope Leo XIII, Supremi Apostolatus, 1883]Image Source: Google Images - Religieuses de Jesus-Marie
Edited from The Catholic Encyclopedia