Saint September 2 : St. Ingrid of Sweden the 1st Dominican Nun in Sweden who was Known for Miracles and Died in 1282 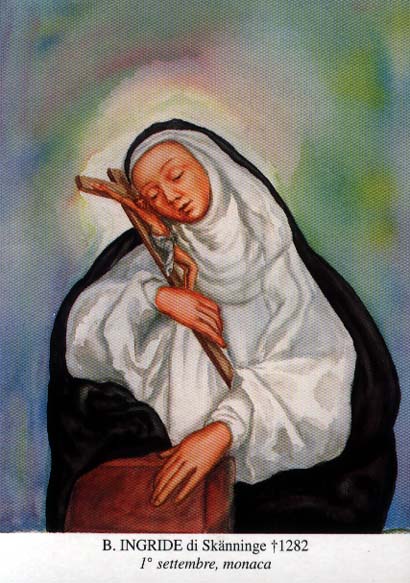 Born in Skänninge, Sweden, in the 13th century, St. Ingrid lived under the spiritual direction of Peter of Dacia, a Dominican priest. She was the first Dominican nun in Sweden and in 1281 she founded the first Dominican cloister there, called St. Martin's in Skänninge. She died in 1282 surrounded by an aura of sanctity.
Miracles obtained through her intercession followed and led to a popular cult of this saint. In 1405, a canonization process was begun and the Swedish Bishops introduced her cause at the Council of Constance. An inquest was held in Sweden in 1416-1417 and the results were inconclusive. In 1497, the cause was reactivated and in 1507 her relics were solemnly translated, and a Mass and Office were composed - but formal canonization seems never to have occurred. During the Reformation, her cult came to an end and her convent and relics were destroyed.
Source: https://catholicfire.blogspot.com/2013/09/st-ingrid-of-sweden.html