Saint September 29 : Feast of the Archangels, among 7 who Stand before God - St. Michael, St. Gabriel, and St. Raphael who are Patrons of Protection, Travel and Art 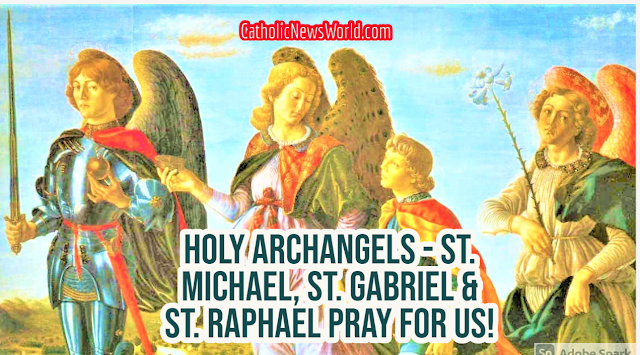 Angels are servants and messengers of God.  Also,  they are our guardians; who are often mentioned in the bible.  They were created by God in the beginning,  however some angels rejected God and became devils.  Archangels are considered to be among the highest rank of angels.  The Catechism explains,  that as purely spiritual creatures angels have intelligence and will: they are personal and immortal creatures,  surpassing in perfection all visible creatures.  We know on the authority of Scripture that there are nine orders of angels,   Angels,  Archangels,  Virtues,  Powers,  Principalities,  Dominations,  Throne,  Cherubim and Seraphim.  The term archangel occurs only in St. Jude and 1 Thessalonians 4:15; but St. Paul has furnished us with two other lists of names of the heavenly cohorts. He tells us (Ephesians 1:21) that Christ is raised up "above all principality, and power, and virtue, and dominion"; and, writing to the Colossians (1:16), he says: "In Him were all things created in heaven and on earth, visible and invisible, whether thrones or dominations, or principalities or powers." It is to be noted that he uses two of these names of the powers of darkness when (2:15) he talks of Christ as "despoiling the principalities and powers . . . triumphing over them in Himself". And it is not a little remarkable that only two verses later he warns his readers not to be seduced into any "religion of angels". He seems to put his seal upon a certain lawful angelology, and at the same time to warn them against indulging superstition on the subject. We have a hint of such excesses in the Book of Enoch, wherein, as already stated, the angels play a quite disproportionate part. Similarly Josephus tells us (Bel. Jud., II, viii, 7) that the Essenes had to take a vow to preserve the names of the angels.

Of the seven "archangels" which appear in the angelology of post-Exilic Judaism, only three, Gabriel, Michael and Raphael, are mentioned in the canonical Scriptures. The others, according to the Book of Enoch (cf. xxi) are Uriel, Raguel, Sariel, and Jerahmeel, while from other apocryphal sources we get the variant names Izidkiel, Hanael, and Kepharel instead of the last three in the other list. Uriel,  in the hebrew language means "God is my light",  or "Light of God" .  He is depicted holding a sword in his right hand,  and a flame in his left.  Jerahmeel means "God's exaltation".  He is venerated as an inspirer and awakener of exalted thoughts that raise a person toward God.  Raguel,  meaning "Friend of God. " Sariel means "Prince of God. " In art,  archangels are sometimes depicted with larger wings.

The following passages from St. Gregory the Great (Hom. 34, In Evang.) will give us a clear idea of the view of the Church's doctors on the point:

We know on the authority of Scripture that there are nine orders of angels, viz., Angels, Archangels, Virtues, Powers, Principalities, Dominations, Throne, Cherubim and Seraphim. That there are Angels and Archangels nearly every page of the Bible tell us, and the books of the Prophets talk of Cherubim and Seraphim. St. Paul, too, writing to the Ephesians enumerates four orders when he says: 'above all Principality, and Power, and Virtue, and Domination'; and again, writing to the Colossians he says: 'whether Thrones, or Dominations, or Principalities, or Powers'. If we now join these two lists together we have five Orders, and adding Angels and Archangels, Cherubim and Seraphim, we find nine Orders of Angels.
SEE ALSO: