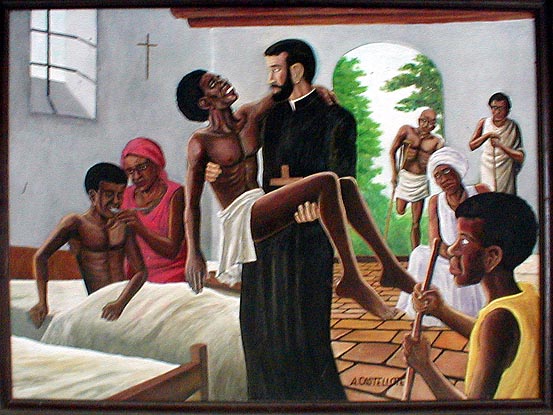 The son of a Catalonian farmer, was born at Verdu, in 1581; he died on the 8th of September, 1654.
St. Peter obtained his first degrees at the University of Barcelona. At the age of twenty he entered the Jesuit novitiate at Tarragona. While he was studying philosophy at Majorca in 1605, Alphonsus Rodriguez, the saintly door-keeper of the college, learned from God the future mission of his young associate, and thenceforth never ceased exhorting him to set out to evangelize the Spanish possessions in America. Peter obeyed, and in 1610 landed at Cartagena, where for forty-four years he was the Apostle of the negro slaves.

Lord, for love of you
St. Peter Claver became
the faithful servant of slaves.
Through his prayer
help us to see the true dignity of the human family,
all children of one father
and to spend ourselves for their salvation.
We ask this through Our Lord Jesus Christ,
your Son,
who lives and reigns with you and the Holy Spirit,
one God for ever and ever. Amen
Early in the seventeenth century the masters of Central and South America afforded the spectacle of one of those social crimes which are entered upon so lightly. They needed labourers to cultivate the soil which they had conquered and to exploit the gold mines. The natives being physically incapable of enduring the labours of the mines, it was determined to replace them with negroes brought from Africa. The coasts of Guinea, the Congo, and Angola became the market for slave dealers, to whom native petty kings sold their subjects and their prisoners. By its position in the Caribbean Sea, Cartagena became the chief slave-mart of the New World. A thousand slaves landed there each month.
They were bought for two, and sold for 200 écus. Though half the cargo might die, the trade remained profitable.

Neither the repeated censures of the pope, nor those of Catholic moralists could prevail against this cupidity. The missionaries could not suppress slavery, but only alleviate it, and no one worked more heroically than Peter Claver.

Trained in the school of Père Alfonso de Sandoval, a wonderful missionary, Peter declared himself "the slave of the negroes forever", and thenceforth his life was one that confounds egotism by its superhuman charity. Although timid and lacking in self-confidence, he became a daring and ingenious organizer.

He became the prophet and miracle worker of New Granada, the oracle of Cartagena, and all were convinced that often God would not have spared the city save for him. During his life he baptized and instructed in the Faith more than 300,000 African-Americans. He was beatified 16 July, 1850, by Pius IX, and canonized 15 January, 1888, by Leo XIII. His feast is celebrated on the ninth of September. On 7 July, 1896, he was proclaimed the special patron of all the Catholic missions among the slaves. Alphonsus Rodriguez was canonized on the same day as Peter Claver.
Source: Edited from the Jesuits.global