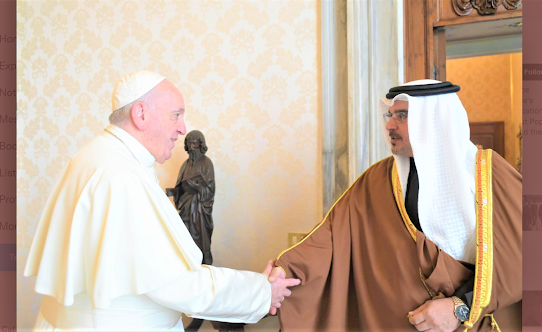 Pope Francis will travel to Bahrain in November. The Holy See Press Office announced that the  Pope will make an Apostolic Journey to Bahrain at the beginning of November. His trip to the Persian Gulf island is from the 3rd to the 6th of November 2022.
A statement released by the Director of the Holy See Press Office on Wednesday said the Pope had accepted the invitation of the country's civil and ecclesial authorities. During his Apostolic Journey, the Pope will visit the cities of Manama and Awali “on the occasion of the Bahrain Forum for Dialogue: East and West for Human Coexistence.” The programme and further details of the Journey will be published at a later date. Pope Francis will be the first Pope to visit Bahrain. 2014 meeting between Pope and King Hamad bin Isa Al Khalifa. Pope Francis received in audience in the Vatican, the King of Bahrain, His Majesty Hamad bin Isa Al Khalifa on 19 May 2014.
According to a Holy See Press Office statement at the time, cordial discussions between the Bahraini King and the Pope focused on various themes of common interest, “with particular reference to the commitment towards peace and stability in the Middle East, as well as the promotion of dialogue and peaceful co-existence among all members of society.” Mention was also made of the Christian community’s positive contribution to the country, and “appreciation was expressed for His Majesty’s personal interest in the needs of the local Catholic community.”
Edited from Vatican News