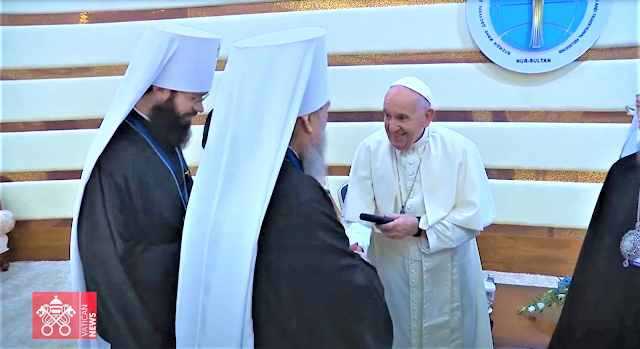 Pope Francis is in Kazakhstan, from September 13-15, for the Congress for the Leaders of World and Traditional Religions. After the large gathering of religious leaders, Pope Francis met privately with the delegation from the Russian Orthodox Church.
He asked them: How is Patriarch Kirill?
They responded: Good, good.
Pope Francis replied: Tell him I say hello.
They said: We spoke yesterday and he asked me to pass along his greeting.
Pope Francis: As do I to him.
The delegation was led by the new foreign minister of the Russian Orthodox Church, who met with Pope Francis at the Vatican in August. He spoke to the Pope in Italian. The Holy Father expressed his desire for a second meeting with Patriarch Kirill. Pope Francis was expected to meet with Patriarch Kirill during this conference, but the Patriarch instead decided send a delegation. His foreign minister said that such a meeting should take place independently of the conference.
A previous meeting of the Pope and Russian Orthodox Patriarch Kirill was a video, in March. At that meeting the Pope asked the head of Russia's  church to work for peace. However, Pope Francis was quoted in an interview as saying that Patriarch Kirill should not be Putin's altar boy, which caused some controversy
Source: Romereports