The Catholic wife and mother of five young children; British journalist and writer Caroline Farrow has been receiving harassment for years. Farrow's children have also been targeted by the activists. Her family has personally been receiving months of harassment from the transgender lobby. Mrs. Farrow's husband is a Roman Catholic diocesan priest(a former Anglican vicar who converted to Catholicism in 2010).
On Monday, October 3rd, 2022, and she was cooking dinner for her family when the police knocked on the door.  She was at home in Guildford, West Surrey, with her family. Caroline was arrested her for alleged malicious communications and harassment. Her electronic devices were confiscated.
CITIZEN GO is paying for her legal fees; if you would like to Donate to help Mrs. Caroline Farrow and her family click: https://go.citizengo.org/EN_GB-2022-10-06-Global-LF-ADE-NA-Caroline_arrested-Caroline_arrested_LP-OTD-ENGB.html 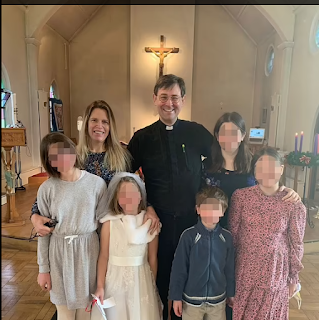 Mrs Farrow said to the police: ‘I think this is outrageous that you are coming round to my house. I have five kids, one who is severely autistic. I’m trying to get dinner ready. Could you not just ring me up?’ The WPC responds: ‘No. I couldn’t have rung you up because we need to search your property.’ Then the PC says: ‘We need to search your property for electronic devices which may be used in the commission of the offences.’:
According to the Daily Mail, with whom Mrs. Farrow confided the details of the incident, she was left in a cell for around three hours and interviewed for two. Before she left she had her mugshot taken, and was fingerprinted. Swabs were taken from inside her cheeks. ‘I thought, “Gosh, I’m really being treated like a murderer.” ’ She added: ‘The allegations are malicious communications and harassment. But I am not particularly sure what I am accused of doing even after the police interview. They didn’t come up with any evidence, but it’s not an offence to be insulting.’ She was in police custody for seven hours and got home after midnight, having been released under investigation.
‘There are documents on my laptop I need. For instance, some relate to an application for a school place for our daughter. This has turned my life upside down.’
A furious reaction on social media prompted Detective Chief Inspector David Bentley to explain the actions of the Surrey force. He said: ‘When we receive an allegation of a crime – in this instance one where a grossly offensive message is said to have been communicated – it is our job to assess it alongside any available evidence to identify if an offence has been committed. If it has, we gather further evidence and carry out an investigation to prove or disprove the allegation. That is exactly the process that is being followed in this case.’ But Mrs Farrow has ‘lost confidence and hope in the police and now I don’t bother complaining to them about the abuse I receive’.

How it finished. Being frisked and whisked off to be taken to the cells and shown some memes posted by someone else. pic.twitter.com/dC8GVD6Vra