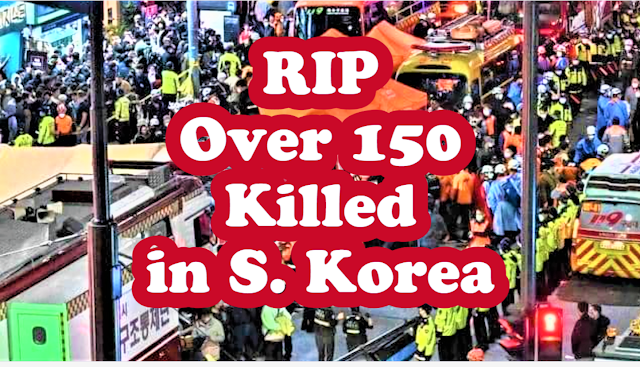 Reports indicate that at least 154 people have been killed and at least 133 others are injured following a crush event at a Halloween party near 173-7 Itaewon-ro in South Korea. The event occurred around the Hamilton Hotel and Itaewon Station. Thousands of people were in costumes; many were in their teens or early 20s.
Pope Francis prayed for the victims after his Sunday Angelus:

"And let us pray to the Risen Lord also for those – especially the young – who died in Seoul, as a tragic consequence of a sudden crowd surge."

FULL TEXT - Condolences from the Catholic Bishops of Korea for the Itaewon disaster in Seoul
“Lord, have mercy on us” (Psalm 123:3).
We entrust to God's mercy the victims who unfortunately lost their lives in the tragedy that took place in Itaewon, Seoul on Saturday, October 29, 2022. In addition, we offer our deepest condolences to the bereaved families, and we also pray for the speedy recovery and peace of the wounded.
We must strive to break the cycle of injustice and irresponsibility that has become a common practice in this society. To do this, we must first be faithful to our respective roles. In particular, for the peace and safety of the people, the relevant authorities must thoroughly examine the cause and process of this tragedy, and ensure that irresponsibility and oblivion are not repeated. I hope that there will be no more sacrifices from many people, especially young people.
Human life and dignity are the most precious values, and nothing in our society can take priority over it. In God, who is the author of life and the source of mercy, the Catholic Church in Korea prays for the victims of this tragedy, and promises to share the pain of the bereaved and walk together.
October 30, 2022  Fr.  Cheol-su Lee, Secretary General of the Catholic Bishops' Conference of Korea
[내용출처 - https://cbck.or.kr/Notice/20221069?gb=K1200 ]
[해당 부분을 어문 저작물, 음향·영상물, 컴퓨터 데이터, 기타 저작물 등에 인용할 때에는 한국천주교주교회의·한국천주교중앙협의회에 저작권 사용 승인을 받아야 합니다.]
Source: https://cbck.or.kr/Notice/20221069?gb=K1200