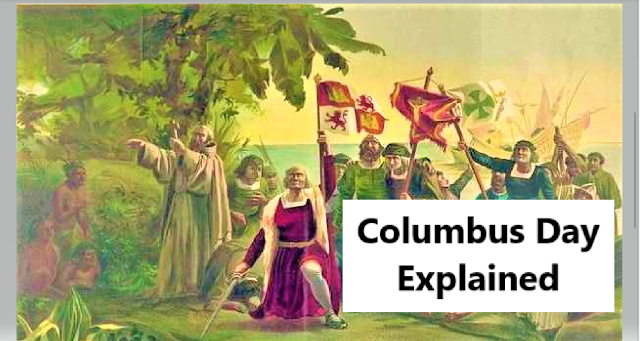 Christopher Columbus, of Italy, is the discoverer of America in the year 1492. Early in the morning of October 12, 1492, a sailor on board the Pinta sighted land, beginning a new era of European exploration and expansion. The next day, the ninety crew members of Columbus’ three-ship fleet ventured onto the Bahamian island that he named San Salvador (now Watling Island, and then called Guanahaní by the natives), ending a voyage begun nearly ten weeks earlier in Palos, Spain.

The first recorded celebration of Columbus Day in the United States took place on October 12, 1792. Organized by the Society of St. Tammany, also known as the Columbian Order, it commemorated the 300th anniversary of Columbus’ landing.
The 400th anniversary of the event inspired the first official Columbus Day holiday in the United States. President Benjamin Harrison issued a proclamation in 1892, “recommending to the people the observance in all their localities of the 400th anniversary of the discovery of America…” and describing Columbus as “the pioneer of progress and enlightenment.” Since then, school programs, plays, and community festivities have been organized across the country in celebration of Columbus Day.
In the decades that followed, the Knights of Columbus, an international Roman Catholic fraternal benefit society, lobbied state legislatures to declare October 12 a legal holiday. President Franklin Delano Roosevelt designated Columbus Day (then celebrated October 12) a national holiday in 1934.  Since 1971, when Columbus Day was designated the second Monday in October, it has been celebrated as a federal holiday. In many locations across the country Americans hold parades to commemorate the day. US President Trump issued a statement affirming Columbus Day in 2020.
"Christopher Columbus had a mystic belief that God intended him to sail the Atlantic Ocean in order to spread Christianity. He said his prayers several times daily. Columbus wrote what he called a Book of Prophecies, which is a compilation of passages Columbus selected from the Bible which he believed were pertinent to his mission of discovery. Columbus's own writings prove that he believed that God revealed His plan for the world in the Bible, the infallible Word of God. Columbus believed that he was obeying the mission God staked out for his life when he set sail west across the Atlantic Ocean."