Get Involved in the National Eucharistic Revival by Downloading the Free Playbook to Renew Encounters with Jesus in the Eucharist! 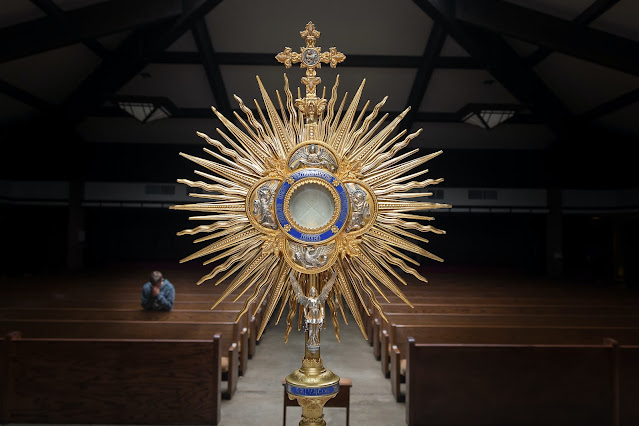 The National Eucharistic Revival is a three-year initiative sponsored by the Bishops of the United States to inspire and prepare the People of God to be formed, healed, converted, united, and sent out to a hurting and hungry world through a renewed encounter with Jesus in the Eucharist – the source and summit of our Catholic faith.

The Revival officially launched in June 2022, and its milestone event will be a National Eucharistic Congress in Indianapolis, IN, from July 17-21, 2024. The National Eucharistic Revival and National Eucharistic Congress are a direct response to the Holy Father’s call for a “pastoral and missionary conversion which cannot leave things as they presently are” so that the Church in the United States might be “permanently in a state of mission” (Evangelii Gaudium, n. 25).
This eucharistic movement seeks to bring together clergy, religious, laity, apostolates, movements, and parish and diocesan leaders to spur momentum, collaboration, and lasting impact for the renewal of the Catholic Church in the U.S. over the next three years. Each year will have a strategic focus for formation and missionary discipleship.
Get Involved by Download the Free Leader's Playbook:
A Resource to Inspire a Response No two communities have identical gifts, nor will their needs be exactly the same. A rigid one-size-fits-all approach to the Revival would only hinder what the Holy Spirit wants to accomplish in and through your ministry and across your diocese. ‍ The Leader’s Playbook is designed as a springboard to help lay leaders, priests, and deacons brainstorm creative, effective, and practical initiatives that fit the unique character of their people. ‍
Download the FREE Playbook in PDF:
https://uploads-ssl.webflow.com/626afca9aa56ce4dd046dd56/633227d342274c021605f6a9_NationalEucharisticRevival_LeadersPlaybookYear1%5BENGLISH%5D_ForPrint.pdf
What's Inside the Playbook?
In the playbook, you’ll learn more about the four pillars of the Revival, which act as a general blueprint to help you align your grassroots Revival response with the spirit of the national movement. ‍ These pillars also help you cultivate the seeds of revival in your own heart. We invite you to take this playbook to prayer. May God bless you in your work for his kingdom!
https://www.eucharisticrevival.org/leaders-playbook
What Happens Each Year of the National Eucharistic Revival?
Year One (2022-2023): Year of Diocesan Revival
During the first year, the U.S. bishops will be inviting their presbyterates, diocesan teams, and parish leaders to a renewed love for Jesus in the Eucharist by hosting and highlighting diocesan-wide events such as eucharistic congresses and days of formation centered on the mystery of the Eucharist in the life of the Church.
Year Two (2023-2024): Year of Parish Revival
During the Parish Year, pastors will invite their parishioners and staff to become even more truly and deeply eucharistic communities through small groups, increased exploration of the sacrifice of the Mass, eucharistic adoration, catechetical studies on the Real Presence of Christ, parish-sponsored processions, and other activities to enable deeper encounters with Our Lord in the Eucharist.
Year Three (2024-2025): Year of the National Eucharistic Congress and Missionary Sending
During the third year, the Church will gather for the first National Eucharistic Congress in almost fifty years, where approximately 80,000 Catholics are anticipated to draw close to Jesus in the Eucharist by way of a pilgrimage to Indianapolis from July 17-21, 2024. The intended fruit of the Congress is to prepare the faithful from around the country to go out to the peripheries of their communities as “eucharistic missionaries” filled with the flame of divine charity for those around them. Following the vote of the U.S. bishops at the November 2021 general assembly, a new corporation has been formed to plan and implement this milestone event.