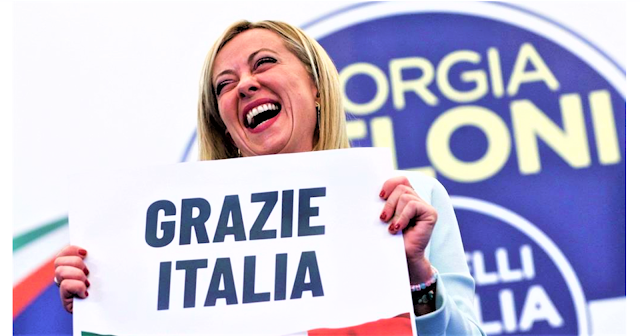 The new prime minister of Italy, Georgia Meloni has taken up her role and is the 1st female in her position. Pope Francis prayed for the new government after his Angelus address on October 23rd, "And today, at the beginning of a new government, we pray for the unity and peace of Italy." Meloni, who is a conservative Christian thanked the Pope for his words:  "I thank His Holiness #PapaFrancesco for the thought he wished to address to Italy on this very important day for the Government that I have the honor to preside over. @Pontifex_it"

The head of the Catholic bishops in Italy, Cardinal Matteo Zuppi, also released a statment of greetings to the new prime minister:
Card. Zuppi's message of greetings to the Prime Minister
After the swearing-in ceremony of the new government at the Quirinal Palace, Cardinal Matteo Zuppi, Archbishop of Bologna and President of the CEI, sent a message of good wishes to the President of the Council of Ministers, the Honorable Giorgia Meloni. We publish the text below.
Most Illustrious Mr. President, in my name and in the name of the Italian Episcopal Conference, I express my sincere congratulations on the office you are called to hold. With her there is also a historical page for our country: the new government is the first led by a woman in the role of Prime Minister. Before the election, the Permanent Episcopal Council had reminded the elect to always carry out their mandate at the service of all and in the vision of the Encyclical Fratelli Tuttiand the political love it indicates. The challenges are great. The Council had indicated some, which it considered to be the main ones: poverty, the demographic winter, the protection of the elderly, the gaps between territories, the ecological transition and the energy crisis, work, especially for young people, hospitality and the integration of migrants, the streamlining of bureaucratic procedures, the reforms of the democratic organization of the state and of the electoral law. Over all these looms the tragedy of the war in progress which requires the commitment of all, in full harmony with Europe, in the unavoidable and urgent search for a right path that can finally lead to peace. In wishing you and all the members of your Government good work, the Church in Italy, respecting and distinguishing between orders and roles, ensures that you will not miss a constructive dialogue inspired solely by the desire to contribute to the pursuit of the common good of the country and the protection of the inviolable rights of the person and the community.
Source: https://www.chiesacattolica.it/il-messaggio-di-auguri-del-card-zuppi-al-presidente-del-consiglio/
Cardinal Matteo Zuppi Georgia Meloni Government Italy Prime Minister of Italy