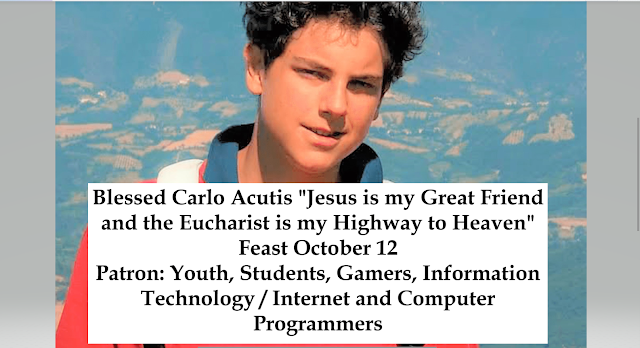 Prayer: Oh Father, who has given us the ardent testimony, of the young Blessed Carlo Acutis, who made the Eucharist the core of his life and the strength of his daily commitments so that everybody may love You above all else, let him soon be counted among the Blessed and the Saints in Your Church. Confirm my faith, norture my hope, strengthen my charity, in the image of young Carlo who, growing in these virtues, now lives with You. Grant me the grace that I need ... I trust in You, Father, and your Beloved Son Jesus, in the Virgin Mary, our Dearest Mother, and in the intervention of Your Blessed Carlo Acutis. Amen. Our Father, Hail Mary, Glory Be

He died in a hospital in Monza, Italy, in 2006, offering all his sufferings for the Church and for the Pope.
This popular young teen was known for his love of video games, soccer, animals and sweets. His parents were Antonia Salzano and Andrea Acutis. He was born on May 3, 1991, in London, United Kingdom and died on October 12, 2006, in Monza, Italy.

Carlo said, “our goal must be the infinite and not the finite. The Infinity is our homeland. We are always expected in Heaven”. In particular, Carlo placed the Sacrament of the Eucharist at the centre of his life and he called it “my highway to Heaven”.
He attended daily Holy Mass and went to Confession every week. Carlo was very gifted with everything related to the world of computers and liked computer programming, film editing, website creation, editing and laying out small publications, to help those most in need especially children and the elderly.
Carlo explained, “to be always united with Jesus, this is my plan of life”. “I am happy to die because I lived my life without wasting even a minute of it on anything unpleasing to God”.  Cardinal Angelo Comastri said,
Carlo asks of us the same thing: he asks us to spread the Gospel through our lives, so that each of us can be a beacon to light the journey of others.
He used his first savings to buy a sleeping bag for a homeless man he often saw on the way to Mass.  In his diary he explained, “Sadness is looking at oneself, happiness is looking at God. Conversion is nothing but a movement of the eyes”.
Raejsh, a Hindu who cleaned at Carlo's house, was impressed that someone "as handsome, young and rich” decided to live a simple life. “He captivated me with his deep faith, charity and purity,” he remarked. Through Carlo’s example, Raejsh decided to be baptized in the Catholic Church.
Purity was very important in Carlo's life. "Each person reflects the light of God", was something he commonly said. It hurt him when his classmates did not live according to Christian morals. He would encourage them to do so, trying to help them understand that the human body is a gift from God and that sexuality had to be lived as God had intended. "The dignity of each human being was so great, that Carlo saw sexuality as something very special, as it was collaborating with God's creation," his mother recalled.
Carlo's true passion was the Eucharist: "his highway to heaven". This led to his mother's conversion. A woman who had only gone "three times to Mass in her life" was conquered in the end by the boy's affection for Jesus. She enrolled herself in a theology course so she could answer all the questions of her young son.
At the age of 11, Carlo began to investigate the Eucharistic miracles that have occurred in history. He used all his computer knowledge and talents to create a website that traced that history. It comprises 160 panels and can be downloaded by clicking here and that have also made the rounds of more than 10,000 parishes in the world.
Carlo could not understand why stadiums were full of people and churches were empty. He would repeatedly say, “They have to see, they have to understand."
Carlo was diagnosed with one of the worst types of leukemia – Acute Myeloid Leukemia (AML or M3). His reaction was striking:
"I offer to the Lord the sufferings that I will have to undergo for the Pope and for the Church, so as not to have to be in Purgatory and be able to go directly to heaven."  He died shortly after.
“He is being a priest from heaven," says his mother.
Edited from VaticanNews.va and http://www.synod.va/content/synod2018/en/youth-testimonies/carlo-acutis---servant-of-god.html