Saint October 12 : St. Wilfrid, a Bishop Confessor and the Patron of England - A Great Defender of the Rights of the Holy See 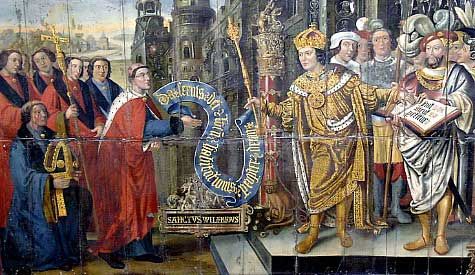 BISHOP
Born:
634 in Northumbria, England
Died:
709 at Oundle, Northhamptonshire, England
Patron of:
Middlesbrough, England (image source: GOOGLE
Bishop of York, son of a Northumbrian thegn, born in 634; died at Oundle in Northamptonshire, 709. He was unhappy at home, through the unkindness of a stepmother, and in his fourteenth year he was sent away to the Court of King Oswy, King of Northumbria. Here he attracted the attention of Queen Eanfleda and by her, at his own request, he was sent to the Monastery of Lindisfarne. After three years spent here he was sent for, again through the kindness of the queen, to Rome, in the company of St. Benedict Biscop. At Rome he was the pupil of Boniface, the pope's archdeacon. On his way home he stayed for three years at Lyons, where he received the tonsure from Annemundas, the bishop of that place.