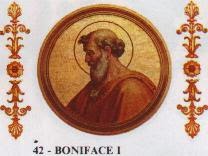 Pope Boniface I (Latin: Bonifatius I; died 4 September 422) was Pope from 28 December 418 to his death in 422. He was a contemporary of Saint Augustine of Hippo, who dedicated to him some of his works. On the day of the funeral for Pope Zosimus, which was held at San Lorenzo fuori le Mura, partisans of Eulalius occupied the Lateran. Later that day, he proceeded thither with a crowd consisting of deacons, laity and a few priests, and was elected bishop. The new Pope and his supporters remained at the church until Sunday, 29 December, for the formal ordination customarily took place on a Sunday. Meanwhile, on the Saturday after Eulalius had been elected, a majority of the priests of the church elected Boniface, who had previously been a councilor of Pope Innocent, and was also ordained on 29 December at the Church of Saint Marcellus in the Campus Martius. The Urban Prefect Aurelius Anicius Symmachus warned both parties to keep the peace, and wrote to the Emperor Honorius that Eulalius, who had been elected first and in due order, was in the right.

The Emperor answered on 3 January 419, recognizing Eulalius as the rightful Bishop of Rome. Despite these official acts, violence broke out between the two groups, and Boniface was seized by the Prefect's police and taken to a lodging outside the walls where he was detained under the surveillance of the Prefect's agents.[2] Boniface's partisans did not let the matter rest there and sent a petition to Emperor Honorius alleging irregularities in the election of Eulalius. In response, the Emperor suspended his previous order and summoned both parties to appear for judgment before him and other Italian bishops on 8 February. The hearing deferred a decision to a synod which was scheduled to meet at Spoleto on 13 June, but commanded both Boniface and Eulalius to stay out of Rome. Since Easter was approaching, the bishop of Spoleto, an outside party, was asked to celebrate the rites of this important holy day in Rome.[3] Both the Empress Galla Placidia and her husband Constantius III favored Eulalius, who had been elected first. Stewart Oost observes that papal elections at the time were "still quite indefinite and both parties could thus with right claim proper election and consecration." Although Eulalius appeared to be destined to be confirmed to the post, by boldly entering Rome on 18 March—Easter Sunday that year fell on 30 March—and disobeying Imperial orders, he lost the support of the authorities. Symmachus sent his police to occupy the Lateran, where Eulalius had established himself, and escorted him to a house outside the walls of Rome. Bishop Achilleus of Spoleto celebrated the Mass in the Lateran. The proposed Council of Spoleto was canceled, and on 3 April 419, Emperor Honorius recognized Boniface as the rightful Pope.[4] Boniface continued the opposition to Pelagianism, persuaded Emperor Theodosius II to return Illyricum to Western jurisdiction, and defended the rights of the Holy See. Shared from Wikipedia