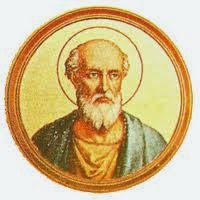 Date of birth unknown; died about 107. In the Liberian Catalogue his name is given as Aristus. In papal catalogues of the second century used by Irenaeus and Hippolytus, he appears as the fourth successor of St. Peter, immediately after St Clement. The same lists allow him eight years of reign, covering the end of the first and the beginning of the second century (from about 98 or 99 to about 106 or 107). The earliest historical sources offer no authentic data about him. In his "Ecclesiastical History" Eusebius says merely that he succeeded Clement in the episcopate of the Roman Church which fact was already known from St. Irenaeus. This order of succession is undoubtedly correct. The "Liber Pontificalis" says that Evaristus came of a Hellenic family, and was the son of a Bethlehem Jew. It also attributes to him the allotment of definite churches as