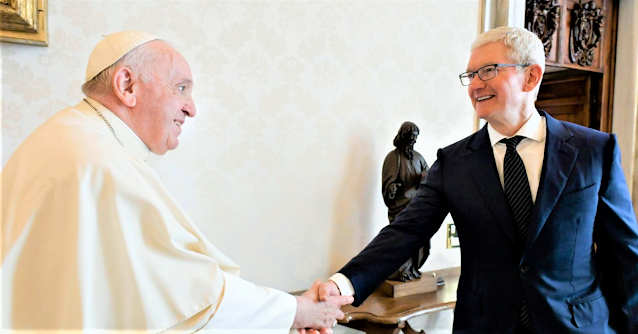 On October 3rd, 2022, the CEO of Apple met with Pope Francis at the Vatican. He said: Holy Father Good morning. So good to see you.
Pope Francis welcomed the CEO of Apple, Timothy Donald Cook, in a private audience. During the meeting, the Pope explained with English, I need a translator.
Cook: No problem.
Before the Vatican, Tim Cook traveled Naples, to launch the first Apple Developer Academy in Europe and he was awarded an honorary degree from the University of Naples Federico II.
Near the end of the meeting, Pope Francis gave Cook and other members of the Apple team gifts. Pope Francis and the Apple CEO also met in 2016 during the 50th World Day of Social Communications. Apple, an electronics company, is currently worth 2.34 Trillion USD and has over 100,000 employees. Pope Francis has also met with Mark Zukerberg and Elon Musk at the Vatican.


Thank you to the University of Naples Federico II for the honor, for your hospitality, and for the incredibly important work you do. https://t.co/NfP8a6ZjC4

The Pontifical Academy for Life has often discussed the issues facing emerging technologies. They wrote: It is not news that, in recent years, Artificial Intelligence (AI) has advanced exponentially, as evidenced by its many applications in different fields of knowledge. Today, 37% of organizations in the world have implemented AI in some way (which represents a 270% increase in the past four years). Pope Francis clarifies that this progress, as well as that in robotics, “can make a better world possible if it is joined to the common good.” In this sense, he hopes for technological progress that does not increase the inequalities in society; if it does, it will not be “true progress,” one that takes into account the dignity of the human person and care for Creation.