On, October 14, an exhibition of 600 square meters, divided into six rooms,  opened to the public, where the history and mysteries surrounding the Shroud of Turin, whose main piece is a hyper-realistic image of Jesus Christ, will be explored.

The Cathedral of Salamanca hosted the exhibition  "The Mystery Man" , with a hyperralist body of Jesus Christ never before represented. The curator of the exhibition,  Ángel Blanco from Salamanca, highlighted in the presentation that no one had dared to make this image, “and we are going to present it now”. As he advanced, it is a representation of a body in human quality, "without artistic movement". 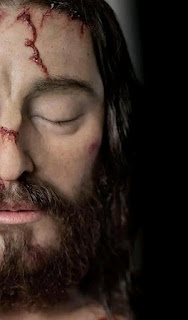 Blanco approached this story of the Shroud  looking for a scientific explanation, “and I was trapped by its story”, and there came a time when he understood, “that wonderful things have no explanation”. The commissioner of "The Mystery Man" realized when placing the body, "that he was before the image that we all have of Jesus of Nazareth."

For this person in charge, it is an opportunity to feel and be in front of the image, “as has never been done before”.

"The Mystery Man" is made up of  six rooms  where the traditional exhibition format is combined with technology, such as video mapping or an immersive room, where hundreds of artistic images of Jesus Christ are projected. In the last room is the  hyperralist body  of Jesus, created with a kind of latex with silicone, which weighs 75 kilos, and as the curator of the exhibition details, "if you touch it sinks", with human hair. "The body is not real but it has the appearance of a human," Blanco explained.
Entrance to the final room for small groups
In this regard, it emphasizes that it is a "unique" way of seeing it, and the entrance to the room will be made by small groups,  of 15/20 people, who will be able to see it up close with their hands behind their backs and where taking photos will not be allowed. images.
That body is based on the study of the Holy Shroud, which reflects, in the words of the person in charge of the exhibition, "a harsher torture than painting has always reflected, with an atrocious death caused not only by crucifixion, but also for the flogging, by two people 60 centimeters from his body.” Other data from different studies reflect how he received  150 impacts  that caused   250 wounds  distributed throughout his body in the form of a fan.

For this exhibition, the artists who have worked on hyper-realistic sculpture "capture everything that happens on the Holy Shroud and it is a figure created from it." And to obtain the measurements of the body, 1.78 meters tall , they have been based on the bleeding points of the feet, legs or knees, among others. And in this way, "the body of Jesus has been anthropologically reconstructed, making tests with three-dimensional volumes," they pointed out in the presentation of the exhibition.
“The Physical Signs of the Passion”
At the opening ceremony this Thursday, October 13, the Bishop of the Diocese of Salamanca,  Msgr. José Luis Retana , recalled that they were going to witness a "worldwide success", which is presented as a first in Salamanca. "Thank you for the confidence in proposing us for this exhibition, which we supported from the first moment." And in relation to the hyper-realistic body, he considers that our eyes “are going to contemplate the physical signs of the passion of the Lord and of the love of God who becomes flesh in Jesus Christ, and who dies as an evildoer and as a sacrifice of our salvation.”
For his part, the mayor of Salamanca, Carlos García Carbayo , expressed his satisfaction at having his city chosen as the start of this "worldwide" exhibition that aims to reach the five continents.
As for the CEO of  ArtiSplendore ,  Francisco Moya , described this important exhibition, which begins in Salamanca, as a "pilgrim", "and a long journey awaits it for the next 20 years, because we would like to walk with young and old, in events such as the WYD in Lisbon or the Jubilee in Rome in 2025”. Likewise, he stressed that Jesus of Nazareth has been the most represented man in the world, "and the most famous of humanity."

Two carvings of Ricardo Flecha
The dean of the Cathedral of Salamanca, the diocesan priest, Antonio Matilla , also took part in the presentation, showing the gratitude of the Cabildo "for being able to host this exhibition", with two carvings by the Zamorano sculptor, Ricardo Flecha. Lastly, he trusts that this sample "removes the soul and spirit of believers and non-believers, and that it brings us all closer to the mystery of God and of man that influences the man of the Shroud."

After the presentation, which took place in the  sacristy of the New Cathedral , the hyper-realistic body was discovered, covered by a white cloth in the last of the exhibition rooms under the gaze of the bishop, Mons. José Luis Retana; the mayor of Salamanca, Carlos García Carbayo; the dean of the Cathedral, Antonio Matilla; and those responsible for  ArtiSplendore , who followed the descriptions about the image of the exhibition curator, Álvaro Blanco. The presentation was attended by some thirty national, Italian and Portuguese journalists, in addition to the local ones.

Main pieces of the exhibition
–  30 denarii coins  similar to those used to make Judas' payment.

– Recreation of two types of Roman “flagrum” , because the sentence used to be carried out by two individuals placed to the right and to the left. Those Roman flagrums have taxilim balls that hit the prisoner and caused real injuries.
– Recreation of the  Titulus Crucis  that was found in Rome and where it is recovered, with a calligraphic analysis, the title of the cross written in different languages: Hebrew, Latin and Greek.
– Collection of  8 Roman spears  of different models, among which is a model that corresponds to the wound that the man on the Shroud has on the right side, in the 5th and 6th rib with a diameter of about 4 cm.
–  Recreation of the Cross , of the “stipe” of the gallows. Contrary to what has been represented, the Cross was not a complete formed element but rather the 'estipite' or main stick was nailed to the execution points, and the prisoner carried the upper part of the cross.

– Recreation of the Holy Sepulchre , with the measurements provided by the expert Florentino Díaz. It features a hologram of Jesus' possible burial and entombment.
–  Recreation of the medieval crypt  where De Charmay claims to find the Shroud.
–  Chamber of Secundo Pía  from the 19th century, . In the year 1898 an ostension of the Shroud was held in Turin (Italy) and Secundo Pia took a photograph of the Shroud in which he discovered that the Shroud is "a photographic negative".
–  Study tables  focused on the scientific investigation of the Holy Shroud with information on the work carried out by the STUD team. It was concluded that the blood was indeed human but the way in which the image was formed is not known since it does not have pigments.

– Carbon 14 table , in which it is stated that the sheet could be from the 13th century. The journal Nature publishes that there are contaminated data.
–  Mandylion:  Research panel where it is stated that if the Shroud existed, it could have had another name, such as “Mandylion”.
–  Solidus of Justinian II  in an original piece that very clearly represents the Holy Shroud. According to all numismatists, this coin is official proof that the shroud already existed in the 7th century, since the numismatist reflects the locks of hair confused with blood.
–  Forensic room  with medical studies carried out on the Shroud and its behavior from the point of view of forensic medicine.
– Video mapping room  where information is projected onto an  image of the Holy Shroud  to understand how the savanna appears and the body it covered.
– Immersive room that covers all the  painting and history of Jesus  from the first century to the present.
–  Room of the body, Lamb of God.  Unlike other techniques and artistic currents that advise taking perspective to appreciate the work, hyperrealism encourages you to approach what is on display. It will be accessed in groups of 15/20 people to appreciate the work as closely as possible.
https://catedralsalamanca.org/the-mystery-man-desvela-en-salamanca-al-hombre-de-la-sindone/