There has been a suspected kidnapping of German Catholic Missionary Priest named Fr. Hans-Joachim Lohre who is living in Mali, Africa.
"We know that the police have started looking for Fr. Hans-Joachim, but at the moment it is not yet known whether and which group may have kidnapped him", the Missionaries of Africa (White Fathers) tell Fides News from their General Curia in Rome. The missionary living in Mali but of German nationality has been missing since Sunday, November 20.
He is locally known by the nickname "Ha-Jo", Fr. Hans-Joachim, age 65, has been living in Mali for more than 30 years. "Father Hans-Joachim, from the Institute of Christian-Islamic Formation (IFIC) and head of the Faith and Encounter Center of Hamdallaye, has been missing since yesterday morning", the internal newspaper of the Missionaries of Africa reported. "He had to go to the Kalaban Coura community for Sunday mass and there has been no news of him since then". 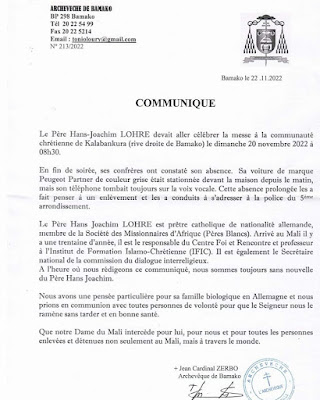 His car was found near the institute in the capital, Bamako, and investigators later found the chain with the priest's broken cross next to his car. "His car door was open and there were footprints on the ground as if someone had resisted", says Dia Monique Pare, of Ific.
The missionary's nationality may have attracted the interest of some groups operating in the country. In Mali, the Bundeswehr, the German army, participates with some 1,200 soldiers in the UN MINUSMA mission. Germany is one of the few European countries to still have its own military in Mali, after the withdrawal of those of France, while Great Britain intending to join. The German government is also considering ending the mission, for which the parliament has given a mandate until May 2023. Several jihadist groups linked to both Al Qaeda and ISIS operate in the country, and in the past they have been responsible for several kidnappings of foreigners, such as that of Sister Gloria Cecilia Narváez, the Colombian missionary kidnapped on February 7, 2017 near Koutiala (Mali) and released on October 9 last year. Edited from Fides.org
Images : Facebook 𝗔𝗻𝘁𝗼̂𝗿𝗼̂𝗹𝗮