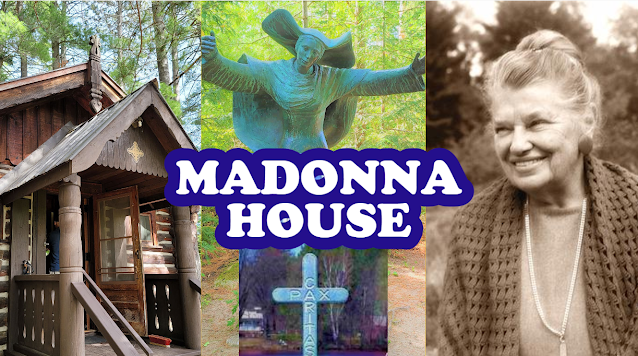 Madonna House celebrates its 75th anniversary!  It was founded by Catherine de Hueck Doherty, originally of Russia, when she moved to Combermere,  Ontario,  Canada,  in 1947. There,  building on the foundations of a Friendship House,  she founded a new apostolate.  Madonna House began as a group of laypeople including her husband Eddie Doherty.   At the suggestion of Pope Pius XII,  beginning in 1954 members have been making a commitment to dedicate themselves to Madonna House for life,  as celibate men and women.  The total membership now numbers approximately 200; laymen,  women,  and priests.  Members wear a large metal cross with the Latin words "Pax" and "Caritas" meaning "Peace" and "Love."
(Image of Our Lady of Combermere at Madonna House) 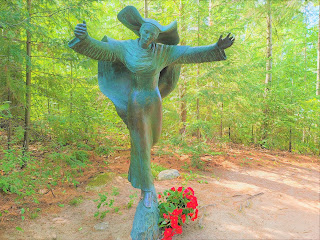 Guests arrive from various countries to live and work at Madonna House.
Madonna House itself developed as a Training Centre for lay apostles.  Over the years many thousands of guests — young and not so young,  lay and cleric,  men and women of many cultures,  Catholic and not Catholic — have been inspired,  set on fire,  born anew and renewed in spirit through the hospitality and formation received at Madonna House,  and have taken their experience home to the marketplaces.
Among the hundreds of guests each year,  a few receive a vocational call from God and his Mother to dedicate their lives to him through Madonna House,  and pour out their lives in the apostolic works of the Madonna House community.  They make promises to live in poverty,  chastity,  and obedience according to the spirit and mandate of Madonna House.  The scope of the Apostolate now extends from our training center in Combermere to eighteen mission houses in various countries. 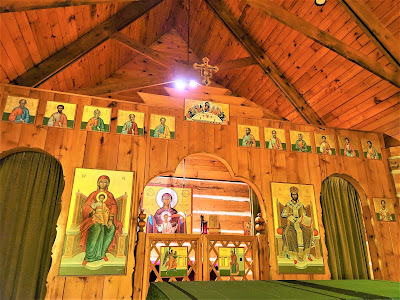 (Image of the Madonna House Chapel)
Madonna House is constituted as a Public Association of the Christian Faithful within the Roman Catholic Church,  under the authority of the bishop of the Diocese of Pembroke.  Since 1958, the Madonna House family has included associate clergy: priests,  bishops,  and deacons serving in their own parishes,  dioceses,  and ministries,  living and proclaiming the Madonna House spirituality in multiple countries and innumerable ways. 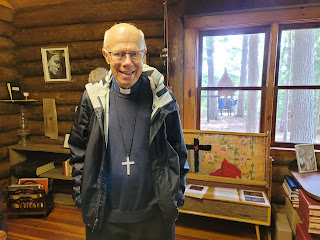 (Image of Fr. David May of Madonna House)
Members of the Madonna House community live a simple daily routine beginning with a brief prayer service,  followed by a day of work,  and ending with Mass and dinner.  Work at the main house generally consists of the day-to-day maintenance of the community,  care of a farm,  and the sorting and distribution of donations to the poor.
The spirituality of the Madonna House Apostolate is summarized in The Little Mandate,  a "distillation" of the Gospel message of Jesus Christ brought forth by the apostolate's foundress.  Some members of the apostolate live in "poustinia",  meaning a small,  sparsely furnished cabin or room (the term poustinia has its roots in the Russian word for "desert").  For these few staff workers,  their voluntary life as poustiniks is somewhat like that of a hermit,  though less strict. 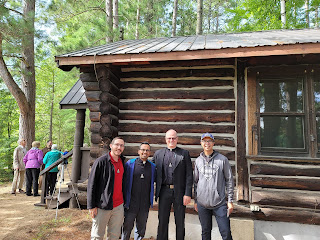 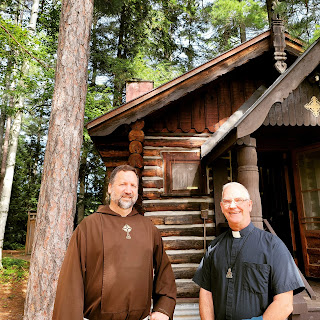 (Images: Companion of the Cross priests visit Madonna House/EWTN Priest, Fr. Mark visits Madonna house with Companion of the Cross priest Fr. Jerry Gauvreau)
Madonna House welcomes guests into their community,  allowing anyone to come and join their daily routine of work and prayer for varying lengths of time at their training centre in Combermere.  Also,  once a year,  a program is offered to families at Madonna House's summer camp called Cana Colony.  Cana Colony was begun as a response to the request by Pope Pius XII to Catherine Doherty in 1951 that she and Madonna House would "always remember the family. " Cana Colony began the following year and the camp is located at the edge of Bennett Lake.
The main work of the Madonna House Apostolate is serving the poor — both the physically and spiritually poor.  Donations sent to the community are redistributed locally and internationally.  Through their missionary field houses,  Madonna House staff workers serve the needs of the poor in many ways,  from "prayer and listening houses" to soup kitchens. 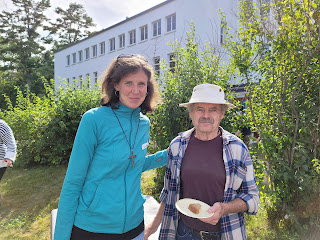