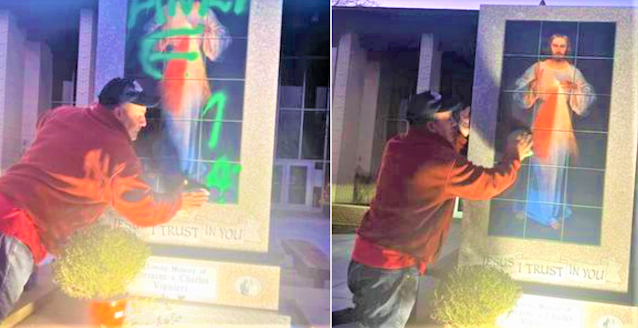 The Catholic Church of Saint Peter’s Catholic Church, in Kenosha, Wisconsin, USA was vandalized. A parishioner discovered neon green spray paint across the front of the Divine Mercy monument on November 22 in the morning. The graffiti painted on the monument, “ANKHEEMMAAT,” may mean “Ankhemmaat,” the name of a 4th-century BC Egyptian priest.

Kenoshanews.com reports that member of the church alerted the Kenosha Police soon after the discovery.

“The vandalism at Saint Peter’s consisted of green spray paint graffiti on one of the exterior granite shrines near their entrance to the church,” Kenosha Police Sgt. Jeffrey Galley said in a statement Monday. “A criminal complaint was made earlier today. It’s unknown if the spray paint can be removed with a remover so the extent of the damaged has not been determined.” He explained that there are not yet any suspects. The priest Fr. Ireneusz Chodakowski said members are upset and such vandalism has never occurred at the church during his 14 years of service there. (Kenoshanews.com)

2 parishioners restored the monument by Nov. 23rd and the parish wrote on their Facebook Page:

"Thanks to our parishioners Jack & Dino who worked to quickly remove the graffiti from our Divine Mercy Monument in front of the church.  Thanks also to all who expressed their concern and offered prayers and assistance after hearing about this very unfortunate incident that occurred earlier in the week.  Jesus we trust in you!"