Pope Francis says "As Jews and Christians, let us seek to do all that is humanly possible in order to put an end to war and to pave paths of peace" to the World Jewish Congress 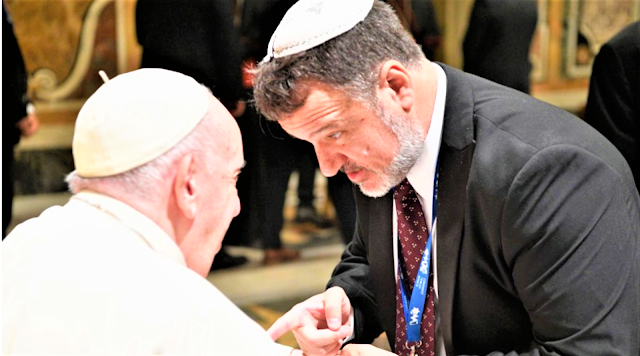 TO THE PARTICIPANTS IN THE CONFERENCE OF THE WORLD JEWISH CONGRESS

Dear Representatives of the World Jewish Congress, I offer you my fraternal welcome. I thank you, Ambassador Lauder, for your kind words. This visit testifies to and strengthens the bonds of friendship uniting us. From the time of the Second Vatican Council, your Congress has been in dialogue with the Commission for Religious Relations with the Jews, and for many years has sponsored meetings of great interest.

We, Jews and Catholics, share priceless spiritual treasures. We profess faith in the Maker of heaven and earth, who not only created humanity, but forms every human being in his own image and likeness (cf. Gen 1:26). We believe that the Almighty has not remained distant from his creation, but has revealed himself, not communicating only with an isolated few, but addressing us as a people. Through faith and the reading of the Scriptures handed down in our religious traditions, we can enter into a relationship with him and cooperate with his providential will.

We likewise share a similar outlook on the final things, shaped by trust that on the journey of life we are not advancing towards nothingness, but towards an encounter with the Most High who cares for us. An encounter with the One who has promised us, at the end of time, an eternal kingdom of peace, where everything that is a threat to human life and coexistence will come to an end. Our world is marked by violence, oppression and exploitation, yet these do not have the final word. The faithful promise of the Eternal One speaks to us of a future of salvation, of new heavens and a new earth (cf. Is 65:17-18; Rev 21:1), where peace and joy will have dwell secure, where death will be eliminated forever, where he will wipe away the tears from all faces (cf. Is 25:7-8) and there will be no more mourning, crying out or pain (cf. Rev 21:14). The Lord will bring about this future; indeed he himself will be our future. While there may be different conceptions in Judaism and Christianity about how this fulfilment will come about, the consoling promise that we share remains. It encourages our hope, but no less so our commitment to ensure that the world in which we dwell and the history we make reflects the presence of the One who has called us to worship him and to be the guardians of our brothers and sisters.

Dear friends in light of the religious heritage that we share, let us regard the present as a challenge that unites us, as an incentive to act together. Our two communities of faith are entrusted with the task of working to make the world more fraternal, combatting forms of inequality and promoting greater justice, so that peace will not remain an otherworldly promise, but become a present reality in our world. The path to peaceful coexistence begins with justice, which, together with truth, love and freedom, is one of the fundamental conditions for lasting peace in the world (cf. POPE JOHN XXIII, Encyclical Pacem in Terris, 18, 20, 25). How many human beings, created in the image and likeness of God, are violated in their dignity as the result of the injustice that racks our world and represents the underlying cause of so many conflicts, the swamp that breeds wars and violence! The One who created all things with order and harmony urges us to reclaim this swamp of injustice that engulfs fraternal coexistence in the world, even as environmental devastations compromise the health of the earth.

Common and concrete initiatives aimed at promoting justice call for courage, cooperation and creativity. And they benefit greatly from faith, from the ability to place our confidence in the Most High and to let ourselves be guided by him, rather than by mere earthly interests, which are always immediate and shortsighted, marked by self-interest and incapable of embracing the whole. Faith instead makes us realize anew that every man and woman is made in the image and likeness of the Most High, and is called to journey towards his kingdom. The Scriptures, too, remind us that we can achieve little or nothing unless God gives us strength and inspiration: “Unless the Lord builds the house, those who build it labour in vain” (Ps 127:1). In other words, our political, cultural and social initiatives to better the world – what you call Tikkun Olam – will never prove successful without prayer and without fraternal openness to other creatures in the name of the one Creator, who loves life and blesses those who are peacemakers.

Brothers and sisters, today in many parts of the world, peace is threatened. Together we recognize that war, every war, is always and everywhere a defeat for all humanity! I think of the conflict in Ukraine, a great and sacrilegious war that is threatening Jews and Christians alike, depriving them of their loved ones, their homes, their property and their very lives! Only with a serious resolve to draw closer to one another and in fraternal dialogue is it possible to lay the groundwork for peace. As Jews and Christians, let us seek to do all that is humanly possible in order to put an end to war and to pave paths of peace.

Dear friends, I thank you most heartily for this visit. May the Most High, who has “plans for peace and not for harm” (Jer 29:11), bless your good works. May he accompany you on your journey and lead us together in the way of peace. Shalom!”