Saint November 10 : St. Leo the Great a Pope who Prevented an Attack by Attila the Hun and a Doctor of the Church 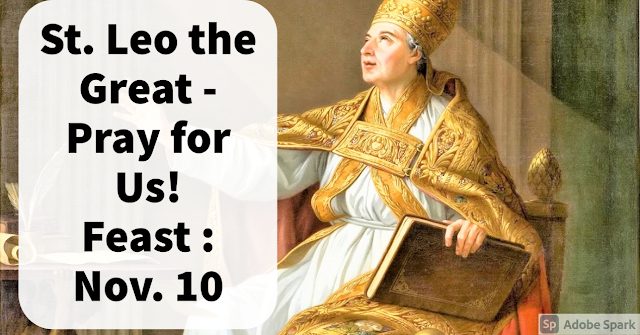 Leo was a native of Tuscany and his father's name was Quintianus. Leo was a deacon of the Roman Church under Pope Celestine I (422-32). Sixtus the third died on the 19th of August, 440, and Leo was chosen his successor. Leo was consecrated on the 29th of September of the same year, and governed the Roman Church for the next twenty-one years. He was the Supreme Pontiff from 440 to 461. (Biography continues below video)
PRAYER: God our Father, you will never allow the powers of hell to prevail against your Church, founded on the rock of the apostle Peter. Let the prayers of Pope Leo the Great keep us faithful to your truth and secure in your peace. Through our Lord Jesus Christ, your Son, who lives and reigns with you in the unity of the Holy Spirit, one God, for ever and ever. Amen.

Leo required people to rebuke Pelagianism publicly and to subscribe to an unequivocal confession of Faith before receiving Communion. The heresy of Pelagianism overemphasized human freedom. He also fought against Manichæism, which saw everything material as evil. Another heresy he suppressed was the Nestorians who attacked Mary’s title of Theotokos.

In Leo's conception of his duties as supreme pastor, the maintenance of strict ecclesiastical discipline occupied a prominent place. This was particularly important at a time when the rules of morality were being seriously violated. The pope, confirmed with a dogmatic letter the doctrine of the Incarnation, and the union of the Divine and human natures in the one Person of Christ against the heresy of Monophysitism.  This general council held in Chalcedon in 451 solemnly accepted Leo's dogmatical epistle as an expression of the Catholic Faith concerning the Person of Christ.

Attila the Hun and Pope Leo

When Northern Italy had been devastated by Attila the Hun, Leo met the King of the Huns and prevented him from marching upon Rome. Pope Leo said; "Thou hast subdued, O Attila, the whole circle of the lands which it was granted to the Romans, victors over all peoples, to conquer. Now we pray that thou, who hast conquered others, should conquer thyself. The people have felt thy scourge; now as suppliants they would feel thy mercy.”

As Leo said these things Attila was silent, as if thinking deeply. And, suddenly there was a  miraculous vision of the apostles Peter and Paul, like bishops, standing by Leo, the one on the right hand, the other on the left. They held swords stretched out over his head, and threatened Attila with death if he did not obey the pope’s command. Then Attila was appeased, by Leo’s intercession, and promised a lasting peace. He obtained from him the promise that he would withdraw from Italy and negotiate peace with the emperor.

Leo was also active in building and restoring churches.  Leo also restored St. Peter's on the Vatican.  Of his letters, which are of great importance for church history, 143 have come down to us. Leo died on the 10th of November, 461, and was buried in the vestibule of St. Peter's on the Vatican. In 688 Pope Sergius had his remains transferred to the basilica itself. They rest today in St. Peter's, beneath the altar specially dedicated to Saint Leo. In 1754 Benedict XIV exalted him to the dignity of Doctor of the Church. Leo, one of only three pontiffs who’ve been given the title ‘Great;’ the others being St. Gregory and St. John Paul the second.