Saint November 4 : St. Charles Borromeo a Reformer of the Church whose Uncle was a Pope and the Patron of Catechists, Catechumens, Seminarians 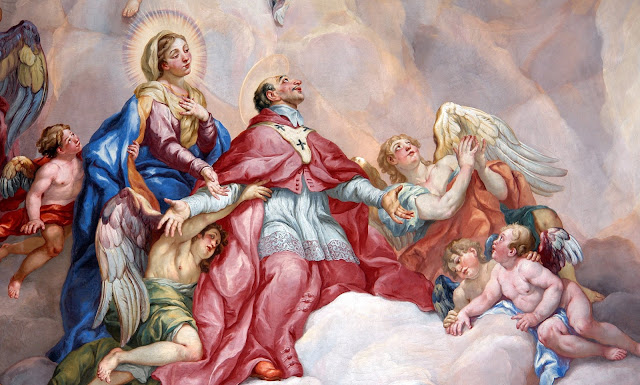 St. Charles Borromeo — Archbishop of Milan, Cardinal-Priest of the Title of St. Prassede, Papal Secretary of State under Pius IV, and one of the chief factors in the Catholic Counter-Reformation — was born in the Castle of Arona, a town on the southern shore of the Lago Maggiore in northern Italy, 2 October, 1538; died at Milan, 3 November, 1584. His emblem is the word humilitas crowned, which is a portion of the Borromeo shield. He is usually represented in art in his cardinal's robes, barefoot, carrying the cross as archbishop; a rope round his neck, one hand raised in blessing, thus recalling his work during the plague. His feast is kept on 4 November.
His father was Count Giberto Borromeo, who, about 1530, married Margherita de Medici. Her younger brother was Giovanni Angelo, Cardinal de' Medici, who became pope in 1559 under the title of Pius IV. Charles was the second son, and the third of six children, of Giberto and Margherita. Charles' mother died about the year 1547, and his father married again. (Biography continues below the video)
Prayer of St. Charles:
Almighty God, you have generously made known to human beings the mysteries of your life through Jesus Christ your Son in the Holy Spirit. Enlighten my mind to know these mysteries which your Church treasures and teaches. Move my heart to love them and my will to live in accord with them. Give me the ability to teach this Faith to others without pride, without ostentation, and without personal gain. Let me realize that I am simply your instrument for bringing others to the knowledge of the wonderful things you have done for all your creatures. Help me to be faithful to this task that you have entrusted to me. Amen.