Ukraine's Major Archbishop Sviatoslav, during Divine Liturgy at the Vatican, says "At a special moment in the history of our Church and Ukraine, full of pain, blood, torment and suffering...." 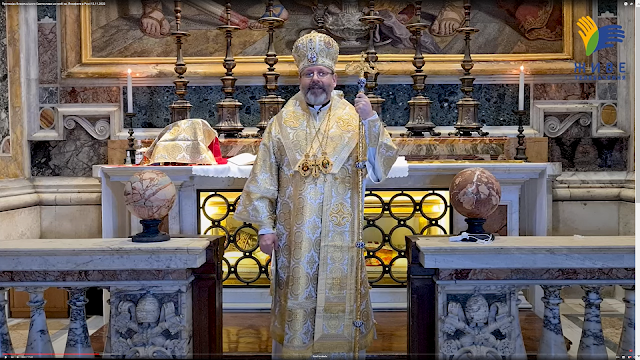 The Assembly of Superiors of the UGCC ended with a Eucharistic prayer in St. Peter's Basilica at the tomb of the holy hieromartyr St. Josaphat (November 12) and the celebration of important anniversaries in the life of the Church began.

The head of the Ukrainian Greek-Catholic Church (UGCC) had also met with Pope Francis and Pope Emeritus Benedict XVI.

"I am a good shepherd. The good shepherd gave his life for the sheep", - these words of Christ, recorded in the 10th chapter of the Gospel of John, a passage from which is heard on the day of the liturgical commemoration of St. Josaphat, Archbishop of Polotsk, especially sounded on November 12, 2022 in the Basilica of St. Peter in the Vatican

As every year, the Ukrainian community of Rome, together with representatives of other nations, gathered for a joint Eucharistic prayer at the throne of Saint Basil, under which the relics of Saint Josaphat have been resting since the Second Vatican Council. The Divine Liturgy was presided over by the Head and Father of the Ukrainian Greek-Catholic Church His Beatitude Sviatoslav, with whom six archbishops and bishops concelebrated, as well as over fifty priests of various Catholic Churches, among whom were participants of the Assembly of Superiors of the UGCC, which took place from November 9 to 12 and ended with worship. The participation of His Eminence Gintaras Grushas, ​​Archbishop of Vilnius, where Saint Josaphat began his monastic career, was especially significant. Numerous consecrated persons and lay people united in prayer.

"At a special moment in the history of our Church and Ukraine, full of pain, blood, torment and suffering, we gathered here, in the heart of Christianity, at the tomb of the Apostle Peter, and our holy martyr Josaphat gathered us here," said His Beatitude Sviatoslav at the beginning of the sermon. noting that while "our aspiration is to convey the voice of the long-suffering Ukrainian people to the entire Christian world", here, in the basilica, "we also hear the voice of God", who spoke through the gospel reading: "I am the Good Shepherd". Jesus seems to say, "don't be afraid, even if they don't understand you, don't want to listen, turn their eyes away from your pain, don't be afraid, because I am with you, and you will lack nothing."

Commenting on Christ's words that a good shepherd gives his life for his sheep, the Head of the UGCC noted that they were carefully read by bishops, priests, and abbots of monasteries when they saw the Russian army coming, when they were faced with a choice: run away like a "mercenary". or stay with his sheep, "like a good shepherd." "And today I want all of us to give thanks together for the fact that our Church has good shepherds on the example of our Savior Christ Jesus," said the preacher, holding back tears and sharing with the present bishop Mykhailo Bubnii, Exarch of Odessa, the joy of the release of a part previously occupied territories on the right bank of the Dnieper.

Noting that today everyone was gathered here by "the good shepherd, the holy priest-martyr Josaphat", His Beatitude Svyatoslav emphasized that the power of his figure, which renewed the monasticism of the Kyiv Church, was "a call to conversion, a call to enter through the open gate, which is Christ himself, in His mystery Repentance". And in the end, he was decorated with "wounds of martyrdom, which indicated the presence of the wounds of Christ the Lord on the body of our Church and our people."

In the context of the fact that next year will mark the 400th anniversary of the martyrdom of St. Josaphat, the Head of the UGCC addressed Fr. Robert Lyseik, Protoarchimandrite of the Basilian Order of St. Josaphat, instructing that, as part of the celebration of this anniversary, the Basilian monks respond to the needs of the faithful, who today "need the power of the grace of the Holy Spirit, which St. Josaphat would bring them", visiting each parish with the saint's relics and healing wounds people "with those medicines that Christ left us." His Beatitude Svyatoslav also thanked God and made a greeting on the occasion of the 125th anniversary of the founding of the Pontifical Ukrainian Collegium of St. Josaphat and the 90th anniversary of its current seat on Rome's Janiculum Hill. The Divine Liturgy, in which bishops Borys Gudziak, Dionysiy Lyakhovich, Bohdan Dzyurakh, Yuriy Dzhujar and Iryney Bilyk also joined, ended with a prayer for Ukraine.