A historical reality is that the first “thanksgiving” meal in the United States was celebrated by Spanish settlers, in what became Florida. This was explained by Historian Dr. Michael Gannon as he wrote about what occurred on September 8th, 1565.
1. “When the first Spanish settlers landed in what is now St. Augustine on September 8, 1565, to build a settlement, their first act was to hold a religious service to thank God for the safe arrival of the Spanish.
FIRST they Celebrated the Holy Mass, Father Francisco Lopez, the Chaplin of the Spanish ships, insisted that the natives from the Timucua tribe be fed with the Spanish settlers. This was the very first Thanksgiving and the first Thanksgiving meal in the United States.
2. The Spaniards, with food that they brought with them on the ship, made the communal meal. History tells us that  the meal probably involved salted pork, garbanzo beans, bread and red wine. 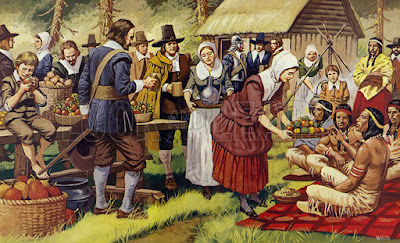 3. This account of the first “thanksgiving” was found in Father Francisco’s memoirs. He wrote, “the feast day [was] observed . . . after Mass, ‘the Adelantado [Menendez] had the Indians fed and dined himself.’”
4. The feast celebrated by the Spaniards was that of the Blessed Virgin Mary’s birthday, on  September 8. The meal “may have also included … If the Timucua contributed, it would likely have been with corn, fresh fish, berries, or beans.”
5. Before the Mass was celebrated, “Father Francisco López, the fleet chaplain…came ashore and met Menéndez holding a cross… Menéndez came on land, knelt and kissed the cross.”
The word Eucharist another word for the Mass comes from the Greek meaning “thanksgiving”)
HAPPY THANKSGIVING and Remember to THANK GOD with your Family!
Thanksgiving Day Prayer : Lord, we thank you for the goodness of our people and for the spirit of justice that fills this nation. We thank you for the beauty and fullness of the land and the challenge of the cities. We thank you for our work and our rest, for one another, and for our homes. We thank you, Lord: accept our thanksgiving on this day. We pray and give thanks through Jesus Christ our Lord. R: Amen. —from Catholic Household Blessings and Prayers. (USCCB)
America American Thanksgiving Thanksgiving