Wow Christ the King Statue in Poland is the Largest in the World and Made the Guinness book of Records - SHARE to Inspire! 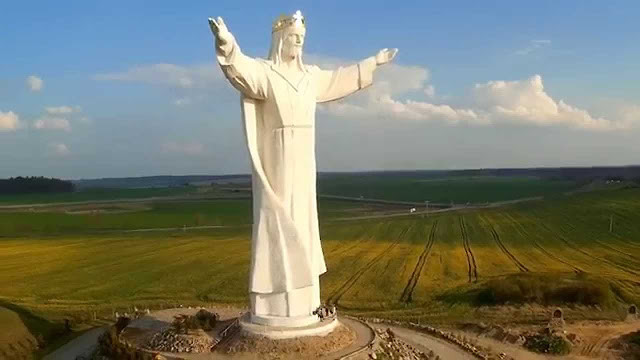 Christ the King (Polish: Pomnik Chrystusa Króla, lit. Monument of Christ the King) statue of Jesus Christ is located in Świebodzin, western Poland. It was completed on 6 November 2010. The figure is 33 metres (108 ft) tall, the crown is 3 metres (9.8 ft) tall, and with its mound, it reaches 52.5 metres (172 ft). Five years were spent in construction and the costs were approximately $1.5 million to build. This was collected from donations of the 21,000 residents of the town and led by Sylwester Zawadzki, a retired Polish priest. It is the tallest statue of Jesus in the world. The statue was built on a 16.5 metre embankment of stones and rubble. Christ the King has a height of 33 metres, representing Jesus' age at his death.The Crown of the temple is 3.5 metres in diameter and 2 m in height. It weighs 440 tons. Each hand is 6 m in length and the distance between the ends of the fingers is 24 metres. It is made of concrete and fibreglass. This statue is 3 meters taller than the better known Christ the Redeemer of Rio de Janeiro, standing at 30.1 metres (99 ft) tall. The design was primarily produced by Mirosław Kazimierz Patecki and the technical design by Assoc. Jakub Marcinowski and Assoc. Mikołaj Kłapeć. The clothing and the arms of the statue were designed by Tomasz Stafiniak and Krzysztof Nawojski. Marian Wybraniec, was responsible for the design of the foundations. The construction work was undertaken by staff employed by the Sanctuary of Divine Mercy in Świebodzin. Construction began on 29 September 2006 when the city council of Świebodzin passed a resolution on the establishment of Christ the King. This is the largest statue of Jesus according to the Guinness Book of World Records. Edited from Wikipedia - and ChristianPost
Christ the King Guinness Book of World Records Poland Statues Wow Stories