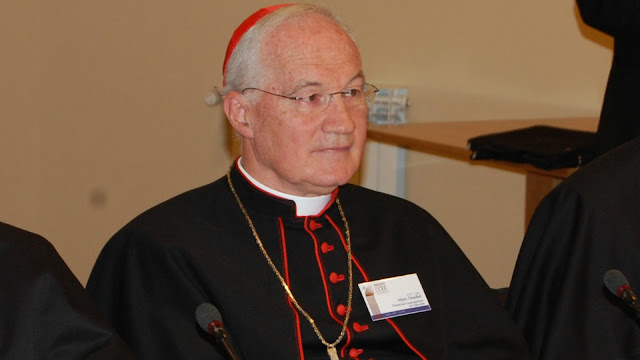 Canadian Cardinal Marc Ouellet, Prefect of the Dicastery for Bishops, has taken legal action for defamation following "unfounded accusations of alleged sexual assault."
Vatican News reports that Cardinal Ouellet who is also President of the Pontifical Commission for Latin America, is responding to "unfounded accusations of alleged sexual assault" made against him in August 2022.
In a statement released on Tuesday, he says he has filed a lawsuit for defamation emphasizing that he never committed the acts the plaintiff accuses him of.
The accusations against the Cardinal were part of a collective legal action filed in Québec against the Corporation Archiépiscopale catholique romaine de Québec et l’Archevêque catholique romain de Québec.
He immediately and firmly denied what he described as “slanderous and defamatory accusations unfairly made against me.”
In his statement, he specifies that “Following a preliminary investigation, Pope Francis determined that there was not sufficient evidence to initiate a canonical investigation against me for sexual assault.”
The Cardinal explains that he is “taking legal action for defamation before the courts of Québec in order to prove the falsity of the allegations” made against him, and to restore his reputation and honour.”
He also stresses that the class action undertaken against him and other members of the clergy has resulted in an “inappropriate association, intentionally constructed and widely spread for improper purposes,” and must be denounced.
Cardinal Ouellet concludes emphasizing that “victims of sexual abuse are entitled to just compensation for the harm they have suffered,” and says he is sensitive to their suffering and is close to them.
He explains that their right to justice is not questioned by his stand which is necessary “to defend the truth, my reputation and my honour.”
Also, he pledges to donate any financial compensation he may receive as a part of these proceedings to support the fight against the sexual abuse of the Indigenous Peoples of Canada. Source: Vatican News