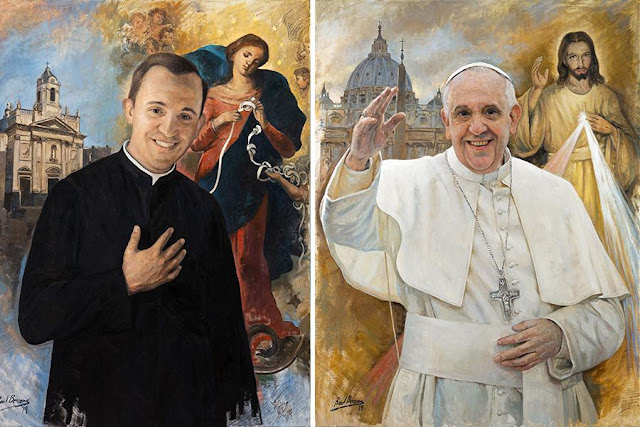 Pope Francis celebrates 53 years of priesthood as he was Ordained a priest on 13 December 1969. The future Roman Pontiff discovered his vocation sixteen years earlier, on 21 September 1953, on the feast of Saint Matthew.
Fifty-two years ago today, on 13 December 1969; and just a few days before his thirty-third birthday, Jorge Mario Bergoglio was ordained to the sacred priesthood.
Vatican News reports that eleven years earlier, on 11 March 1958, he had entered the novitiate of the Society of Jesus where, less than four years after his ordination, he made his perpetual profession on 22 April 1973.
An experience of encounter. The future Pope discovered his vocation in 1953, on 21 September – the liturgical commemoration of St Matthew. On that day, the 17-year-old Jorge Bergoglio, passing by the parish he normally attended in Buenos Aires, felt the need to go to confession. He found a priest he did not know, and that confession changed his life.
(This video is from his 50th anniversary)

“For me this was an experience of encounter,” Pope Francis later recounted. Speaking at the Pentecost Vigil on 18 May 2013, the Pope said of that long-ago visit to the church, “I found that someone was waiting for me. Yet I do not know what happened, I can’t remember, I do not know why that particular priest was there whom I did not know, or why I felt this desire to confess, but the truth is that someone was waiting for me. He had been waiting for me for some time. After making my confession I felt something had changed. I was not the same. I had heard something like a voice, or a call. I was convinced that I should become a priest.”
Jorge Bergoglio experienced the loving presence of God in his life, felt his heart touched and felt the outpouring of God’s mercy, which, with a look of tender love, called him to religious life, after the example of St Ignatius of Loyola. It was this episode of his life that inspired the choice of his episcopal, and later papal, motto “Miserando atque eligendo,” taken from the Homilies of St Bede the Venerable (Hom. 21; CCL 122, 149-151), who, commenting on the Gospel episode of the vocation of St Matthew, writes: “Vidit ergo lesus publicanum et quia miserando atque eligendo vidit, ait illi sequere me” (Jesus saw the tax collector and, because he saw him through the eyes of mercy and chose him, he said to him: Follow me). Priests in the heart of the Pope
Pope Francis often addresses priests in his homilies and speeches. This year, in particular, he mentioned them several times in reference to the current pandemic and his commitment to the faithful tried by the health emergency.
When the Chrism Mass was postponed this year due to Covid-19 restriction, Pope Francis penned a Letter to the priests of Rome. The Pope warmly addressed the pastors of the people of God who “touched with [their] own hands the pain of the people,” remained close to them, shared with them and confirmed them on the journey. “As a community of priests,” Pope Francis wrote, “we were no strangers to these situations; we did not look out at them from a window. Braving the tempest, you found ways to be present and accompany your communities; when you saw the wolf coming, you did not flee or abandon the flock.”
The Holy Father urged priests to be wise, far-sighted and committed; and looking to the future, he wrote of the challenge to priests “to develop a capacity for listening in a way attentive yet filled with hope, serene yet tenacious, persevering yet not fearful.” He concludes his letter, noting that “As priests, sons and members of a priestly people, it is up to us to take responsibility for the future and to plan for it as brothers.”
The apostolic spirit of priests
Later, while speaking with doctors, nurses, and health workers from the Lombardy region in France, Pope Francis recalled “pastoral zeal and creative care” who “helped people to continue the journey of faith and not to remain alone in the face of pain and fear.”
“I have admired the apostolic spirit of so many priests, who reached people by telephone, or went knocking on doors, calling at homes: ‘Do you need anything? I will do your shopping...’. A thousand things,” the Pope said. “These priests who stood by their people in caring, daily sharing: they were a sign of God’s consoling presence.” Then he added: “Regrettably quite a few of them have died, as have doctors and paramedical staff too”; and he remembered, too, the many priests who had been ill, but, “thank God,” were subsequently healed. And he thanked all the Italian clergy, “who have offered proof of courage and love to the people.”
Edited from  Text Source: VaticanNews.va (Video from his 50th Anniversary below)
LET US PRAY: Father of mercy, we come before you with gratitude for the fifty two years of priesthood of Pope Francis, whom you have made Peter’s successor. Support him with the Spirit’s gifts, so that he can continue to preach the Gospel with priestly zeal and lead the Church with wisdom and strength and courage. May his example of long and faithful service be an inspiration to your priests and to all your faithful. We ask this through Christ our Lord. Amen. "Tu es sacerdos in aeternum!"