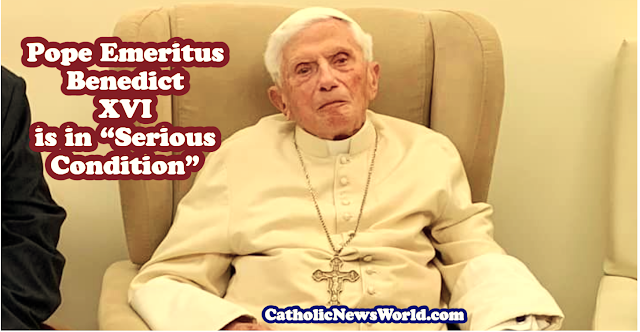 The Vatican again announced the serious condition of Pope Emeritus Benedict XVI. Pope Francis renewed his invitation to pray for Benedict XVI in these difficult hours.
A statement released by the Director of the Holy See Press Office says the Pope Emeritus is in a stable condition.
The Director of the Holy See Press Office, Matteo Bruni, said to reporters: "The Pope Emeritus managed to rest well last night, he is absolutely lucid and alert and today, although his condition remains serious, the situation at the moment is stable.“
The Vatican Released this prayer: Let us pray for the health of Pope Emeritus Benedict XVI: Almighty and Eternal God, You are the everlasting health of those who believe in You. Hear our prayers for your sick servant Benedict for whom we implore the aid of Your tender mercy, Through Christ our Lord. Amen.

Concern for Benedict XVI‘s health was raised on Dec. 28th when Pope Francis concluded the General Audience with an invitation to the faithful to pray for his 95-year-old emeritus who, he said, is very ill.
Bruni also said Pope Francis "renews his invitation to pray for him [Benedict XVI] and to accompany him in these difficult hours."
After the General Audience Pope Francis visited the Pope Emeritus at the Mater Ecclesiae monastery inside the Vatican where he has lived after announcing his resignation in February 2013.
Bruni said that Benedict’s health had “deteriorated in recent hours due to advancing age.” The situation, he added, was “under control at the moment, and was constantly monitored by doctors.”
Edited from Vatican News