RIP Pelé - Death of the World's Greatest Football (Soccer) Player of All Time who said “I got the gift from God..." 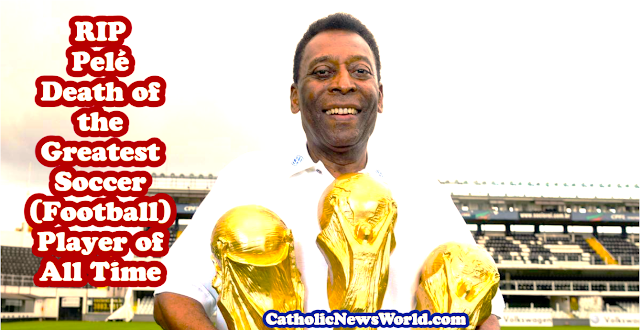 Edson Arantes do Nascimento, known as Pelé, has died at the age of 82. He was a Brazilian  professional soccer player. He is regarded as one of the greatest players of all time and is called "the greatest" by FIFA. Edson was born on October 23rd, 1940, Três Corações, State of Minas Gerais, in Brazil. He died on December 29th, 2022, in Albert Einstein Israelite Hospital, São Paulo, State of São Paulo, Brazil. A large group of his fans formed a prayer chain around his hospital before he died. Pelé was a practicing Roman Catholic and even donated a signed jersey to Pope Francis.  In the past he met with Popes Paul VI and Benedict XVI (2005). 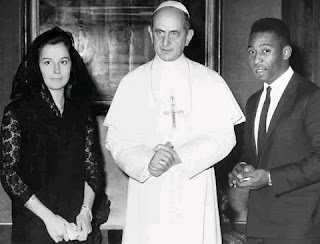 He said “I got the gift from God to play football." He was often seen wearing a golden cross or crucifix. Please pray for the repose of his soul.

Hundreds of Santos Football Club fans gathered, on December 4th, in front of the hospital in Brazil where Pelé was hospitalized.

“May Pele recover soon. A shame, in the middle of the world cup, to see him hospitalized” , said a follower. “I am very worried about Pele! Let's pray for him people”, asked another. “ May God protect Pelé! Our pride, everything will be fine” , highlighted a third.

ACESSA.com reported on December 4th, fans in a circle, lit candles, held hands and prayed a Our Father and a Hail Mary, followed by a round of applause. “We are here with a spiritual strength so that, in this very difficult time that the King is going through, he can rise stronger, because this battle is one of the toughest of his life,” told AFP Marcos Bispo dos Santos, fan of the three time world champion with Brazil.

Pelé was hospitalized since November 29 at the Albert Einstein Hospital, south of Sao Paulo, Brazil to reevaluate treatment for colon cancer, which was diagnosed in September of 2021.

“I want to keep everyone calm and positive. I am strong, very hopeful and following my treatment as usual,"  he said from his Instagram account.

“I have a lot of faith in God and every message of love I receive from you all over the world keeps me full of energy. And watch Brazil in the World Cup too! ”, he added.

"We hope Pelé recovers, we know this is a very difficult time in his life. This is just a tribute from people who are from Santos, so he knows we are here cheering him on and praying for him," said fan Ciro Estivalli.