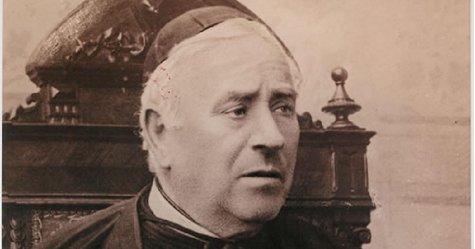 Josep Manyanet was born within a large and Christian family on January 7, 1933 in Northeastern Spain, in the city of Tremp, province of Lleida. He was baptized on the same day at his parish Church of our Lady of Valldeflors, patroness of the city. At a very early age, when he was five years old, he was offered to our Lady by his mother. He had to work to complete his schooling with the Piarist Fathers in Barbastro and at the Seminaries of Lleida and Urgell. He was ordained priest on April 9, 1859.
After twelve years of hard work in the Diocese of Urgell at the service of his bishop as private secretary, librarian of the seminary, administrator of the chancery and secretary for pastoral Visitations, he felt God's call to become a religious priest and to found two religious congregations.
Founder and Apostle of the Holy Family
With the approval of his bishop, he founded, in 1864, the religious congregations of the Sons of the Holy Family Jesus, Mary and Joseph and, in 1874, the Missionary Daughters of the Holy Family of Nazareth with the mission to honor, imitate and propagate the example of the Holy Family of Nazareth and the Christian formation of families, especially through the catholic education of children and youth and through priestly ministry.
With constant work and prayer, with and exemplary life full of virtues, with loving dedication and solicitude for the souls, he guided and encouraged for almost forty years, the formation and expansion of his Institutes, opening schools and centers of ministry in several towns in Spain. Today both Institutes are present in several European countries, in North and South America and in Africa as well.
Specially called by God to present to the world the example of the Holy Family of Nazareth, he wrote several books and booklets to spread the devotion of the Holy Family. He founded the magazine La Sagrada Familia and promoted the idea of the construction of a Temple dedicated to the Holy Family. The Temple, as yet unfinished in Barcelona, was built by the architectural genius and Servant of God Antonio Gaudí, destined to perpetuate the virtues and examples of the Family of Nazareth and to be the universal spiritual home of all families.
His Train of Thought
Blessed Josep Manyanet endeavored to spread the Gospel, both through his preaching and his writings. He wrote many letters, books and booklets for the formation of the members of his religious Institutes, for families and children and for the management of schools. One of the highlights is the School of Nazareth and Home of the Holy Family (Barcelona 1895), his spiritual autobiography in which through the dialogues of Jesus, Mary and Joseph, with a literary character called Desideria, describes a process of Christian and religious perfection inspired in the spirituality of the home and school of Nazareth.
His book A Priceless Family Gem (Barcelona 1899) is a guide for marriages and families, which reminds them of the dignity of the sacrament of marriage as a vocation and the important task of the Christian education of their children.
The spirit of the Holy Family is a book of meditations dedicated to the members of his religious Institutes, where he describes their vocation, identity and mission within the society and the church. There is an edition of his Selected Works (Madrid 1991). A forthcoming edition of his Complete Works will enrich those already published. The first volume is already on the way.
Illnesses and Death
His many endeavors were not free of difficulties. He also had to endure physical illnesses along his life, but his constancy and fortitude, nourished by his humble obedience to the will of God, helped him to overcome all of them.
Because of his poor health, due to open sores on his side, which he labelled God's mercies for 16 long years, on the 17th of December of 1901, full of virtues and good deeds, was called by God to his eternal home, in his school “Jesús, María y José” of Barcelona, central place of his work, surrounded by children, with the same simplicity that characterized all his life. His last words were his fervent prayer Jesus, Mary and Joseph, may I breathe forth my soul in peace with you.
His remains are kept in a burial chapel at the same school were he died, accompanied by the prayer and gratitude of his religious sons and daughters as well as the numerous youth, children and families that, because of his example, live their lives close to God and to his teachings.
Witness to Holiness
His saintly life impressed many people who came in contact with him. The Process of Canonization was formally introduced in 1956. Once the practice of all virtues in a heroic grade was officially recognized by the church in 1982 and proof of a healing miracle attributed to his intercession, Pope John Paul II declared him Blessed in 1984. Now with the approval of another miracle through his intercession, his canonization is scheduled to take place in Rome, on May 16, 2004.
Pope John Paul II has stated that the sanctity demonstrated by Josep Manyanet stems from the Holy Family. He was called by God, so that “in his name every family on earth may be blessed”. The Holy spirit guided him to boldly proclaim the “Gospel of the family”. His inspiration was that “all families may imitate and bless the Holy Family of Nazareth”. That is: “to build a Nazareth in every home”, and to make of every family a “Holy Family”.
His canonization brings forth the truth of his sanctity and the unending value of his message from Nazareth. That makes him a Prophet of the family and the protector of our families.
Homily of John Paul II
Source: http://www.vatican.va/news_services/liturgy/saints/ns_lit_doc_20040516_vives_en.html
Image http://catholikblog.blogspot.com/2014/12/santo-de-hoy-josep-manyanet-y-vives.html