Wow Over 100 Nativity Scenes from Around the World at the Vatican! 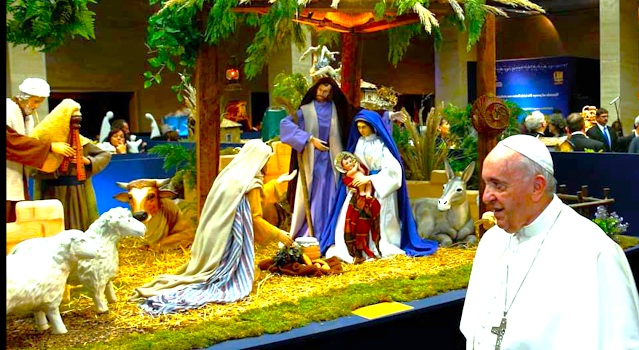 The fifth edition of the International Exhibition of 100 Cribs in the Vatican returns, an exhibition that brings together works created by artists from all over the world, who have expressed their creativity in the representation of the scenes of the Nativity.

The exhibition is held in the  space below Bernini's Colonnade, in St. Peter's Square.  This year 120 nativity scenes will be exhibited, coming from various European countries, such as Ukraine, Hungary, Malta, Slovenia, Slovakia, Croatia, and the world, such as Taiwan, Venezuela and Guatemala. Many of these nations are represented by their respective embassies to the Holy See, which have taken charge of promoting the event in their own countries.

In fact, nativity scenes set in war zones will also be exhibited, such as the one made in Ukraine by Sister Teodosia Polotniuk, of the Donetsk exarchate. At the center of the work is the Nativity recreated in the basement of a structure that recalls the metallurgical plant of Azovstal ', in Mariupol.

ABP. RINO FISICHELLA Pro-Prefect, Dicastery for Evangelization I would say it's a tradition, a living tradition in continuity. I think that people coming is happy, not just to watch the nativities, but to catch the message that the Nativity gives. Each year, a commission chooses certain nativity scenes to be displayed based on their design and what they represent. They sometimes represent current events. For example, this year, a few crèches come from Ukraine.
ABP. RINO FISICHELLA Pro-Prefect, Dicastery for Evangelization I would say this year the most expressive is the Ukrainian nativity. We put intentionally on the beginning of the exhibition and of the end just to show and remember to people that the most important is not just to watch but to remember what is the event that we are suffering all over the world, the war—not just in Ukrainian, but also in several parts unfortunately of the world.
For Archbishop Fisichella the 100 Presepi exhibit challenges people to reflect on their lives and what is going on in the world around them. He believes it offers them a chance to come together as one world and to show support for one another in challenging times. ABP. RINO FISICHELLA Pro-Prefect, Dicastery for Evangelization For me, the most important thing is this one: we are not alone. We participate in one body and we are one world. And we should say with Pope Francis, we are really Fratelli Tutti. The tradition of the 100 Presepi began in 1976 and continues to be a symbol of the true meaning of Christmas—that of caring for one another. KG
http://www.evangelizatio.va/content/pcpne/it/news/100-presepi-in-vaticano-v-edizione/comunicato-stampa.html