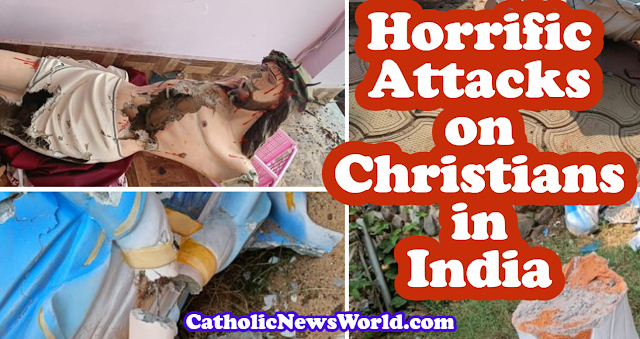 Christians in the central Indian state of Chhattisgarh live in fear following a series of coordinated attacks, displacing more than 1,000 and injuring many.

In one of the latest attacks, hundreds (nearly 500) of villagers armed with wooden sticks and iron rods marched into the Sacred Heart Church at Edka village in Narayanpur district on Jan. 2. The attackers smashed the church’s glass windows, destroyed the church’s altar, crucifix, statues, and strew around consecrated hosts, besides smashing the furniture. (Viewer Discretion advised)

The mob also vandalized a Marian grotto and the presbytery in the village. “The mob destroyed everything, the Church and the presbytery,” he said. Members of the mob began to pelt stones at the church and then they broke open the church doors. Police personnel accompanying the protesters tried to stop the mob from attacking the church. Some of them were reportedly injured while doing so.

Social boycotts and violence forced hundreds of indigenous tribal Christians to flee their homes, which started in the second week of December.

Horrifying Vandalism in Chhattisgarh: A Hindu Supremacist Attack on a Church pic.twitter.com/XkTzBlZnb0

Nearly 18 villages in Narayanpur and 15 in Kondagaon were attacked by suspected right-wing Hindus. Many people were injured during public beatings when they refused to give up their Christian faith.

"People with disabilities, pregnant women and children were also targeted"

People were attacked and displaced for their Christian faith, the fact-finding team, led by Irfan Engineer, director of the Centre for Study of Society and Secularism, which works for social harmony, said in New Delhi.

The team whose members were drawn from the All-India Peoples’ Forum, All-India Lawyers’ Association for Justice and the United Christian Forum visited relief camps where the uprooted Christians were housed.

It asked the authorities to improve basic facilities in the camps till the victims are in a position to return to their respective villages.

“There were reports of a series of attacks on tribal Christens from Dec. 9 to 18,” Father Nicholas Barla, secretary of the Catholic Bishops’ Conference of India (CBCI) Commission for Tribal Affairs, told UCA News on Dec. 29.

Barla, a member of the fact-finding team, said,

“Those displaced were told to denounce their Christian faith and convert to the Hindu religion, failing which they would have to leave their village or face dire consequences, even death.”

"At least two dozen people had to be hospitalized"

Nearly 1,000 aggrieved Christians assembled outside the district collector’s office in Narayanpur on Dec. 18, seeking action against the perpetrators believed to be influenced by the ultranationalist Hindu Rashtriya Swayamsevak Sangh (RSS) organization, which also mentors the ruling Bharatiya Janata Party (BJP).

“Many were badly assaulted and beaten with bamboo canes, tyres, and rods. At least two dozen people had to be hospitalized for injuries like fracture of a collar bone,” Barla said.

Many were assaulted, their houses were forcibly occupied, crops were destroyed and domestic animals were killed, alleged victims of the co-coordinated attacks.

The fact-finding team confirmed there were incidents of forced conversion of tribal Christians to Hinduism.

The RSS has initiated a nationwide campaign called Ghar Vapsi (returning home) to reconvert people who embraced other religions after giving up their Hindu faith.

Quoting a resident, Manglu Koram, from Madamnar village in Narayanpur district, the fact-finding team said he and members of 21 Christian families were taken to a temple where the priest conducted rituals to forcibly declare them Hindus.

Likewise, 18 families from Udidgaon village and three each from Fulhadgaon and Putanchandagaon villages were forcibly converted, the team said.

In a raid on their homes, copies of the Bible were confiscated, the team added.

According to a 2011 census, Christians comprise less than 2 percent of Chhattisgarh's 30 million population. But right-wing Hindu groups claim the actual number is much higher.

“The state police did not initiate action against groups that unleashed violence against Christians earlier. Now, they are fearlessly attacking us,” Archbishop Thakur told UCA News.

The video below shows the US Secretary of State, Anthony Blinken, reporting on the persecution of Christians in India.

Edited from Combined reports from UCA News and Asia News IT