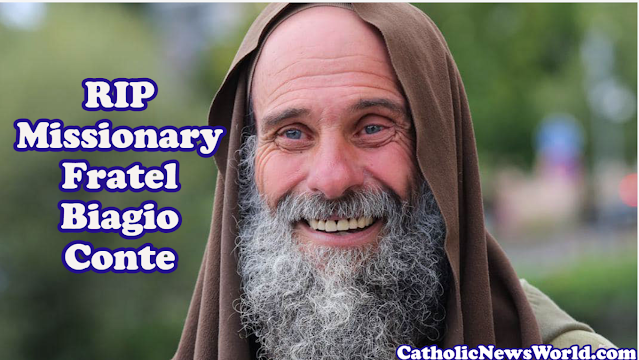 Funeral of Fratel Biagio Conte, a lay missionary who lived among the poorest of the poor in the Sicilian City of Palermo. Born into a wealthy family, he left everything at the age of 26, as a hermit and pilgrim he imitated Saint Francis in Assisi. He founded the "Mission of Hope and Charity" in 1993, which assists and houses more than 600 homeless and migrants in a dozen of structures.
Around 10,000 mourners were present at the Funeral Mass (live streamed from the Arcidiocese of Palermo) in the Cathedral of Palermo. “How can a city be without God?” (fratel Biagio) “It’s fratel Biagio who asks us to become SANTI SUBITO: we follow his examples” (Mons. Lorefice) 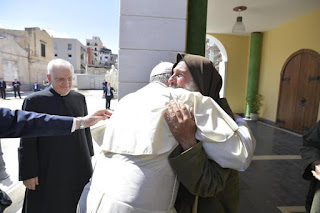 The funeral was held in Palermo for the lay missionary who died on the 12th of January. In his homily, the archbishop of the city gave thanks to the Lord for "the gift of a Christian, of a brother" who believed in the Word of God to the end.
Palermo stopped this morning to say goodbye to brother Biagio Conte - the lay missionary who founded the Mission of Hope and Charity in 1993, destined to welcome the least, migrants, the most fragile of all nationalities and religions. He was 59 years old, and died after a long illness. Thousands of people, especially from Palermo and Sicily, but also from various cities in Italy and Europe, and then religious, Mission volunteers, ordinary citizens, authorities, and the many brothers and sisters who have been welcomed over time by the big heart of brother Biagio, they embraced the lay missionary associated by many with Saint Francis of Assisi for having dedicated himself to the least after giving up a life in a wealthy family.
In the cathedral of Palermo, feelings of gratitude for brother Biagio and pain of separation merged. Many could not hold back tears: during the funeral rite prayer, shared with those around them. He leaves each one the example and the invitation, if not the responsibility, to continue in the footsteps traced by him. "We are here today to celebrate the Eucharist for a man who has made prayer with trust in his God as the compass, the bearing axis, the guiding star of his existence", Archbishop Corrado Lorefice said in his homily: "I we thank you for the gift you have given to the city of Palermo, to the Church and to the world: the gift of a Christian. The gift of a brother who believed in your Word to the end and to the end".
In 1991, after a spiritual crisis, Biagio, wore the habit and sandals, and began to devote himself to the most needy, precisely to the marginalized and the homeless who found refuge at the Palermo station. «Good father - added the prelate - our brother Biagio loved his Palermo, he became involved in his sufferings and contradictions like our Fr. Pino Puglisi. He loved every destination city of his long pilgrimage, he loved every city in the world. Father, we have also seen Brother Biagio cry. Let us too be troubled because "Love is not loved" and have tears like his. Like those of the humble Friar of Assisi who said: "I mourn the passion of my Lord. For love of him I shouldn't be ashamed to go moaning aloud all over the world." Biagio understood, O Father, that your Messiah, Jesus Christ, is thirsty for love. And we can and must help him quench this thirst that continues to cry out to us from the Cross, through love and service to the poorest of the poor, who "thirst for the Church". Of a poor Church, of the poor and for the poor », he concluded, quoting Fr. Joseph Dossetti. 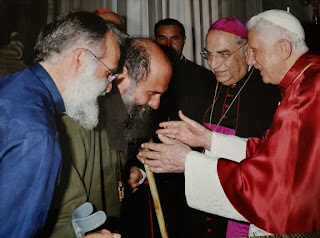 In a message sent to Lorefice, the cardinal president of the Italian Bishops' Conference, Matteo Maria Zuppi, wrote among other things that «in a society in which individual happiness is sought, brother Biagio reminds us that true happiness comes from time spent for others, especially for those who are poor, discarded. His love for the least, the choice to seek answers to never get used to the scandal of poverty and the suffering of the poor, the intelligent and generous welcome are a precious legacy, to be collected and continued, not only in Palermo but in the whole country". Biagio Conte will rest in the church of the Mission of Hope and Charity, in via Decollati, as requested by him, to remain in the "citadel of the poor" which he founded thirty years ago to protect the marginalized.
Source: Vatican News Italian and Facebook Page of Fratel Biagio