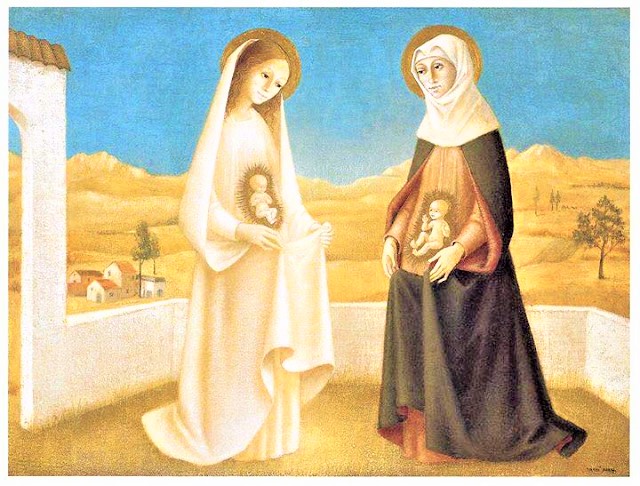 Day of Prayer for the Legal Protection of Unborn Children
Lectionary: 317
Reading 1
Heb 9:15, 24-28
Christ is mediator of a new covenant:
since a death has taken place
for deliverance from transgressions under the first covenant,
those who are called may receive the promised eternal inheritance.

For Christ did not enter into a sanctuary made by hands,
a copy of the true one, but heaven itself,
that he might now appear before God on our behalf.
Not that he might offer himself repeatedly,
as the high priest enters each year into the sanctuary
with blood that is not his own;
if that were so, he would have had to suffer repeatedly
from the foundation of the world.
But now once for all he has appeared at the end of the ages
to take away sin by his sacrifice.
Just as it is appointed that human beings die once,
and after this the judgment, so also Christ,
offered once to take away the sins of many,
will appear a second time, not to take away sin
but to bring salvation to those who eagerly await him.
Responsorial Psalm
Ps 98:1, 2-3ab, 3cd-4, 5-6
R. (1a)  Sing to the Lord a new song, for he has done marvelous deeds.
Sing to the LORD a new song,
for he has done wondrous deeds;
His right hand has won victory for him,
his holy arm.
R. Sing to the Lord a new song, for he has done marvelous deeds.
The LORD has made his salvation known:
in the sight of the nations he has revealed his justice.
He has remembered his kindness and his faithfulness
toward the house of Israel.
R. Sing to the Lord a new song, for he has done marvelous deeds.
All the ends of the earth have seen
the salvation by our God.
Sing joyfully to the LORD, all you lands;
break into song; sing praise.
R. Sing to the Lord a new song, for he has done marvelous deeds.
Sing praise to the LORD with the harp,
with the harp and melodious song.
With trumpets and the sound of the horn
sing joyfully before the King, the LORD.
R. Sing to the Lord a new song, for he has done marvelous deeds.
Alleluia
See 2 Tm 1:10
R. Alleluia, alleluia.
Our Savior Jesus Christ has destroyed death
and brought life to light through the Gospel.
R. Alleluia, alleluia.
Gospel
Mk 3:22-30
The scribes who had come from Jerusalem said of Jesus,
"He is possessed by Beelzebul," and
"By the prince of demons he drives out demons."
Summoning them, he began to speak to them in parables,
"How can Satan drive out Satan?
If a kingdom is divided against itself, that kingdom cannot stand.
And if a house is divided against itself,
that house will not be able to stand.
And if Satan has risen up against himself and is divided,
he cannot stand;
that is the end of him.
But no one can enter a strong man's house to plunder his property
unless he first ties up the strong man.
Then he can plunder his house.
Amen, I say to you, all sins and all blasphemies
that people utter will be forgiven them.
But whoever blasphemes against the Holy Spirit
will never have forgiveness,
but is guilty of an everlasting sin."
For they had said, "He has an unclean spirit."
Prayer to Make a Spiritual Communion-People who cannot communicate now make spiritual communionAt your feet, O my Jesus I bow down and offer you the repentance of my contrite heart, which abysses itself into its nothingness and Your holy presence. I adore you in the Sacrament of Your love, the ineffable Eucharist. I wish to receive you in the poor home that my heart offers you. In anticipation of the happiness of sacramental communion, I want to possess you in spirit. Come to me, oh my Jesus, that I may come to you. May Your love inflame my whole being, for life and death. I believe in you, I hope in you, I love you. So be it. Amen