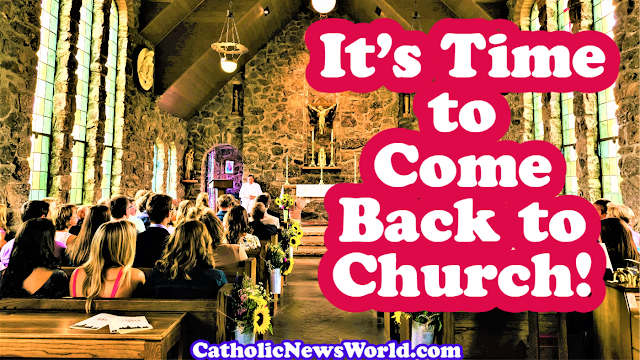 A new survey called the American Religious Benchmark Survey with findings from 2022 reveal how religions were affected by the pandemic. The article "Faith After the Pandemic: How COVID-19 Changed American Religion" was released on January 5th, 2023.
The COVID-19 pandemic for churches and religious organizations revealed that there were concerns over COVID-19 which led many to pause traditional in-person worship services. A recent Pew Research Center study found that nearly one in three churches or religious organizations were completely closed in summer 2020, while others moved outside or online. By March 2022, most were offering some type of regular service, but only 43 percent of religious Americans reported that services currently being offered by their place of worship were back to their pre-pandemic operations. 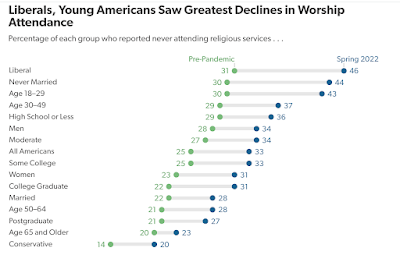 The COVID-19 pandemic disrupted religious participation for millions of Americans. In summer 2020, only 13 percent of Americans reported attending in-person worship services. This rebounded to 27 percent by March 2022, but rates of worship attendance were still lower than they were before the pandemic. However, the pandemic did not appear to affect one’s faith, with most adults reporting that their religious affiliation today was no different than it was pre-pandemic.
In fact, one study showed that the experience of the pandemic may have even strengthened many Americans’ religious faith.[3]
To better understand how COVID-19 and church closures influenced patterns of religious attendance and identity, the Survey Center on American Life at AEI teamed up with researchers at NORC at the University of Chicago to measure religious affiliation and attendance both before the pandemic (2018 to March 2020) and again in spring 2022. For the 2022 American Religious Benchmark Survey, interviews were conducted with the same people to enable us to measure actual changes in religious behavior or identity.
The results show that religious identity remained stable through the pandemic. White mainline Christians and white evangelical Christians were the two largest religious groups both pre-pandemic and in spring 2022. Unaffiliated adults also made up a quarter (25 percent) of adults in both periods. Nineteen percent of adults changed their religious identification during the pandemic, including 6 percent who were unaffiliated pre-pandemic but reported a religion in spring 2022 and 5 percent who reported a religion pre-pandemic but then were unaffiliated in spring 2022.
However, religious attendance was significantly lower in spring 2022 than it was pre-pandemic. In spring 2022, 33 percent of Americans reported that they never attend religious services, compared to one in four (25 percent) who reported this before the pandemic. There was less change among the most religiously engaged Americans. Before the pandemic, 26 percent of Americans reported attending religious services at least once a week, similar to the 24 percent who did so in spring 2022.
The survey also reveals who remained at the pews, who returned to the pews, and who left. Conservatives, adults age 50 and older, women, married adults, and those with a college degree were more likely to attend than were other groups in both periods.
Most adults continued to attend at the same rate as pre-pandemic, including adults age 65 and older, adults with a college degree or higher, and Mormon adults, white evangelical Christians, and white Catholics. Adults age 30–49, adults with less than a college degree, and black Protestants saw the largest increases in attendance between the two periods. Twice as many adults decreased attendance than increased attendance, however. Adults under age 50, adults with a college degree or less, Hispanic Catholics, black Protestants, and white mainline Protestants saw the largest declines in attendance.
Religious Change and Measurement
To address this concern, the 2022 American Religious Benchmark Survey reinterviewed the same respondents, using the same modes of interviewing (online and over the phone) for both periods. These data allow us to isolate the degree of change. Additionally, the AmeriSpeak panel members included in this survey were initially recruited using multiple modes such as online, telephone, and in-person interviewing, which is intended to recruit a more representative sample and mitigate potential nonresponse biases arising in online-only surveys.
Religious Identity Remains Consistent Through the Pandemic
Nationally, religious identity among American adults has stayed largely consistent during the pandemic, with minimal evidence of religious switching during this period. The religious composition of the public in the years before the pandemic and after are nearly identical. Before the pandemic, 17 percent of American adults were white mainline Protestant; 14 percent were white evangelical Protestants. White Catholics comprised one in 10 Americans before the pandemic. Nine percent of Americans were black Protestants. Another 6 percent of Americans identified as Hispanic Catholic. Members of the Church of Latter-day Saints made up 2 percent of the public, and 1 percent of Americans were Jewish. One in four Americans (25 percent) claimed no religious affiliation—or were religiously unaffiliated. These remained essentially unchanged in spring 2022, with religious groups nearly identically sized before and after the pandemic.

Women were more likely than men to attend religious services before the pandemic, and this remains true today.
Married adults were more likely than adults who have never married to attend religious services both pre-pandemic and in spring 2022. Both groups also saw an increase in the percentage reporting they never attended services in spring 2022.  White Catholics and Hispanic Catholics also experienced a notable uptick in those who never attend (11 percent to 18 percent and 10 percent to 20 percent, respectively). Even religiously unaffiliated Americans who reported low levels of religious participation before the pandemic are even less likely to attend today. Nearly three-quarters (74 percent) of religiously unaffiliated Americans say they never attend services now, compared to 62 percent before the pandemic.

Patterns of Attendance Were Stable for Most Americans
Despite the significant increase in Americans who never attend religious services, most Americans report attending at rates similar to before the pandemic. Most adults attended religious services pre-pandemic and in spring 2022 at the same frequency when looking at changes in religious attendance at the individual level. dance.

The increase in Americans who report never attending religious services was largely driven by those who had sporadic attendance patterns before the pandemic. Nearly all Americans who have shifted to no longer attending religious services at all were those who infrequently attended before the pandemic.
Source: https://www.americansurveycenter.org/research/faith-after-the-pandemic-how-covid-19-changed-american-religion/
About NORC at the University of Chicago NORC at the University of Chicago is an independent research institution that delivers reliable data and rigorous analysis to guide crucial programmatic, business, and policy decisions. Since 1941, NORC has conducted groundbreaking studies, created and applied innovative methods and tools, and advanced principles of scientific integrity and collaboration. Today, government, corporate, and nonprofit clients around the world partner with NORC to transform increasingly complex information into useful knowledge.