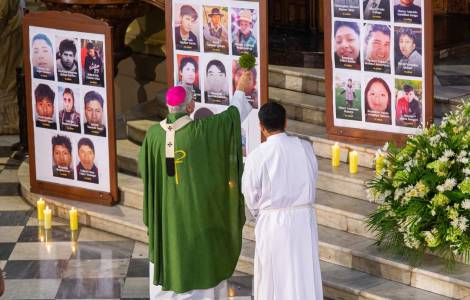 Large popular protests in Peru cause the Peruvian Government to declare a state of emergency for 30 days from January 15th in the departments of Cusco, Lima and Puno, in the province of Callao and in several other regions.  Peruvian President Dina Boluarte, ruled out resignation, while ministers, interior ministers and women's ministers who resigned unexpectedly on January 13 were promptly replaced.
On December 7, 2022, protests erupted across the country after the President of the Republic, Pedro Castillo, was deposed and subsequently arrested after attempting to dissolve parliament, while shortly thereafter the new President, Dina Boluarte, until then Castillos Deputy, had been sworn in. Thousands of people took part in the protests, demanding Boluarte's resignation and early elections. Despite the declaration of a state of emergency, the night curfew and promises to bring elections forward to 2024, protests and clashes with security forces have not abated, including blocking roads and transport routes. Most recently, 50 people were killed as a result of the riots: 41 in clashes between demonstrators and security forces and 9 as a result of roadblocks set up by the demonstrators; the last death was recorded just yesterday in Moyobamba.
Last Sunday, January 15, Archbishop Carlos Castillo of Lima, in spiritual communion with all the churches in the country, celebrated a service for all those who suffered, family members, police officers, doctors and the many young people who lost their lives during the protests in the country and whose photos were placed on the altar. "Our Church is linked to our people because the Lord has called them 'the people of God', his people," stressed Archbishop Castillo. Expressing his dismay and regret at the recent developments, the Archbishop stressed: "The Church is facing a fundamental, spiritual reflection. Investigations, political, economic and social interpretations, are reserved for other areas. We do not go to the right or to the left or in the center, we go deep. This is our mission! Everything can be perfected if you go to the bottom of things". Referring to the words of Pope Francis during his visit to Lima on January 18, 2018, addressed in particular to young people: "Do not lose hope", the Archbishop of Lima pointed out that at the moment "various events and interests to capture our hope as a human community in Peru, but we are a people who suffer and believe and who have a mission to know how to hope". "Sometimes we think that events happened in God's absence, but today we are here, like John the Baptist, to point out the presence of Jesus in this Peruvian tragedy... In our sorrow for the deaths of the brothers and sisters who died in violent deaths in different ways these days, we are not alone, neither they nor we, God is there... Jesus is present in every sacrifice and every sacrifice reflects the face of the God, of the humiliated. The Archbishop urged adopting an attitude of peace and seeking peaceful ways to solve the big issues of each poor region of the country, warning: "There is no need to liquidate the state that has cost so much to build ...Let us not think that by destroying the state things will be put right, for by destroying the state we will plunge into chaos and into the hands of one powerful person who will reduce our lives to crumbs." Finally, the call to "perfect what we have built and correct what is badly built, but let's do it calmly, with awareness, in reflection... Let's try to get down to the meaning of these unjust deaths that challenge us to change and try to build a fraternal country, a country of brothers who unite, understand and cooperate with one another". (SL) (Edited from Agenzia Fides, 17/1/2023)
Peru