Saint January 14 : St. Sava a Monk who Became Metropolitan and Patron of Serbia 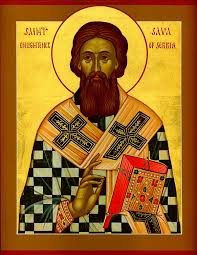 1175
Died:January 14, 1235, Tarnovgrad, BulgariaaMajor Shrine:Temple of Saint Sava (Belgrade)Patron of:Serbia
Born, Rastko, he was the third son of Stephen I Nemanja (r. 1167-1196), ruler of Serbia. In 1191, he went to Mount Athos, where he took the name Sava and became a monk. He was joined there five years later by his father, who had abdicated in favor of his eldest son, Stephen. With his father, Sava established on Mount Athos the monastery of Khilander (Hilandar), which emerged as one of the leading monastic centers for the Serbians. Sava returned to Serbia in 1208 and became archimandrite of Studenica, using the post to wield considerable political and religious influence throughout the kingdom.

He opposed his brother's religious policy of treating with the Holy See and in 1219 was consecrated the metropolitan of an independent Serbian Church by the patriarch of Nicaea with the approval of the Byzantine emperor, who was much in favor of keeping Serbia within the sphere of Greek Orthodox influence. Sava worked to establish dioceses throughout Serbia, promoted native clergy, built churches, and translated numerous religious texts into Serbian. In 1229, he made a pilgrimage to the Holy Land, returning there in 1233 to win recognition of the Bulgarian patriarch from the patriarchs of Jerusalem, Alexandria, and Antioch. he died while on his way home, at Tirnovo, Bulgaria.

(Taken from Our Sunday Visitor's Encyclopedia of Saints