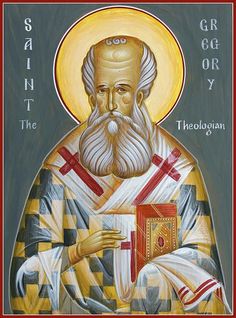 Born:
325, Arianzum, Cappadocia
Died:
January 25, 389, Arianzum, Cappadocia
Major Shrine:
Patriarchal Cathedral of St. George in the Fanar
Biography: Doctor of the Church, born at Arianzus, in Asia Minor, c. 325; died at the same place, 389. He was son -- one of three children -- of Gregory, Bishop of Nazianzus (329-374), in the south-west of Cappadocia, and of Nonna, a daughter of Christian parents. The saint's father was originally a member of the heretical sect of the Hypsistarii, or Hypsistiani, and was converted to Catholicity by the influence of his pious wife. His two sons, who seem to have been born between the dates of their father's priestly ordination and episcopal consecration, were sent to a famous school at Caesarea, capital of Cappadocia, and educated by Carterius, probably the same one who was afterwards tutor of St. John Chrysostom. Here commenced the friendship between Basil and Gregory which intimately affected both their lives, as well as the development of the theology of their age. From Caesarea in Cappadocia Gregory proceeded to Caesarea in Palestine, where he studied rhetoric under Thespesius; and thence to Alexandria, of which Athanasius was then bishop, through at the time in exile. Setting out by sea from Alexandria to Athens, Gregory was all but lost in a great storm, and some of his biographers infer -- though the fact is not certain -- that when in danger of death he and his companions received the rite of baptism. He had certainly not been baptized in infancy, though dedicated to God by his pious mother; but there is some authority for believing that he received  the sacrament, not on his voyage to Athens, but on his return to Nazianzus some years later. At Athens Gregory and Basil, who had parted at Caesarea, met again, renewed their youthful friendship, and studied rhetoric together under the famous teachers Himerius and Proaeresius. Among their fellow students was Julian, afterwards known as the Apostate, whose real character Gregory asserts that he had even then discerned and thoroughly distrusted him. The saint's studies at Athens (which Basil left before his friend) extended over some ten years; and when he departed in 356 for his native province, visiting Constantinople on his way home, he was about thirty years of age. (Biography continues below video)
PRAYER OF ST. GREGORY OF NAZIANZEN To The All-Transcendent God

O All-Transcendent God
(and what other name could describe you?),
what words can hymn Your praises?
No word does You justice.
What mind can probe Your secret?
No mind can encompass You.
You are alone beyond the power of speech,
yet all that we speak stems from You.
You are alone beyond the power of thought,
yet all that we can conceive springs from You.
All things proclaim You,
those endowed with reason and those bereft of it.
All the expectation and pain of the world coalesces in You.
All things utter a prayer to You,
a silent hymn composed by You.
You sustain everything that exists,
and all things move together to Your orders.
You are the goal of all that exists.
You are one and You are all,
yet You are none of the things that exist,
neither a part nor the whole.
You can avail Yourself of any name;
how shall I call You,
the only unnameable?
All-transcendent God!