Saint January 22 : Saint Vincent of Saragossa a Deacon and Martyr of Spain who was Defended by a Raven 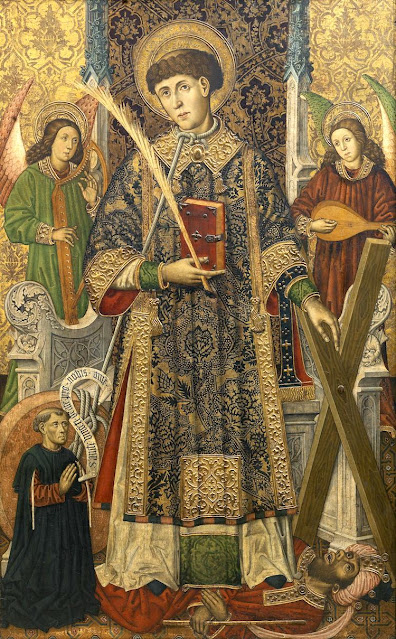 Deacon of Saragossa, and martyr under Diocletian, 304; mentioned in the Roman Martyrology, 22 January. This most renowned martyr of Spain is represented in the dalmatic of a deacon, and has as emblems a cross, a raven, a grate, or a fire-pile.
Patron of : Valencia, Saragossa, Portugal, vintners, brickmakers, and sailors.
He is mentioned in the Litany of the Saints.
His Acts were read in the churches of Africa at the end of the fourth century, as St. Augustine testifies in Sermon 275. The present Acts (Acta SS., III Jan., 6) date from the eighth or ninth century, and were compiled from tradition.
He was born at Saragossa; his father was Eutricius (Euthicius), and his mother, Enola, a native of Osca. Under the direction of Valerius, Bishop of Sargossa, Vincent made great progress in his studies.

He was ordained deacon and commissioned to do the preaching in the diocese, the bishop having an impediment of speech. By order of the Governor Dacian he and his bishop were dragged in chains to Valencia and kept in prison for a long time. Then Valerius was banished, but Vincent was subjected to many cruel torments, the rack, the gridiron, and scourgings. He was again imprisoned, in a cell strewn with potsherds. He was next placed in a soft and luxurious bed, to shake his constancy, but here he expired.
His body was thrown to be devoured by vultures, but it was defended by a raven. Dacian had the body cast into the sea, but it came to shore and was buried by a pious widow. After peace was restored to the Church, a chapel was built over the remains outside the walls of Valencia. In 1175 the relics were brought to Lisbon; others claim that they came to Castres in 864. Cremona, Bari, and other cities claim to have relics. Childeric I brought the stole and dalmatic to Paris in 542, and built a church in honour of St. Vincent, later called St-Germain-des-Prés. Regimont, near Bezières, had a church of the saint as early as 455. Rome had three churches dedicated to St. Vincent; one near St. Peter's, another in Trastevere, and the one built by Honorius I (625-38) and renewed by Leo III in 796. A pilaster found in the basilica of Salona in Dalmatia shows an inscription of the fifth or sixth century in honour of the saint. Sources The Catholic Encyclopedia from BUTLER, Lives of the Saints; STADLER, Heiligenlexicon; ALLARD, Hist. des persecut., IV, 237; LECLERCQ, Les Martyrs, II (Paris, 1903), 437.
Deacon Saints of January Spain