Saint January 7 : St. Raymond of Penyafort who Miraculously Sailed on his Cloak - Dominican Patron of Lawyers and Canon Law 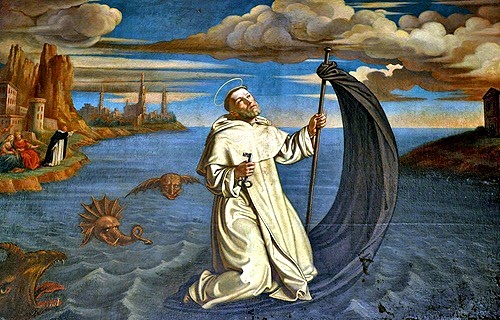 Born:1175 at Penafort, Catalonia, SpainDied:6 January 1275 at Barcelona, SpainCanonized: 29 April 1601 by Pope Clement VIIIPatron of:canon lawyers, lawyersBorn at Villafranca de Benadis, near Barcelona, in 1175; died at Barcelona, 6 January, 1275. He became professor of canon law in 1195, and taught for fifteen years.
Prayer: Glorious Saint Raymond of Peñafort, wise and holy patron,come to the aid of those entrusted to your care, and all who flee to your protection.Intercede for us in our need, and help us through your prayers, example, and teaching, to proclaim the truth of the Gospel to all we meet. And when we have reached the fullness of our years, we beseech you to guide us home to heaven,to live in peace with you, Our Mother Mary, and Our Lord Jesus Christ. Amen.
He left Spain for Bologna in 1210 to complete his studies in canon law. He occupied a chair of canon law in the university for three years and published a treatise on ecclesiastical legislation which still exists in the Vatican Library. Raymond was attracted to the Dominican Order by the preaching of Blessed Reginald, prior of the Dominicans of Bologna, and received the habit in the Dominican Convent of Barcelona, whither he had returned from Italy in 1222.At Barcelona he was co-founder with St. Peter Nolasco of the Order of Mercedarians. He also founded institutes at Barcelona and Tunis for the study of Oriental languages, to convert the Moors and Jews. Once he went with King James to the Island of Majorca to preach about Jesus. The Saint commanded the King to send a woman away. The King said he would, but he did not keep his promise. So St. Raymond decided to leave the Island. The King declared he would punish any ship captain who brought the Saint back to Barcelona. Then, Saint Raymond spread his cloak upon the water, tied up one corner of it to a stick for a sail, made the Sign of the Cross, stepped onto the cloak, and sailed along for six hours until he reached Barcelona. This miracle moved the King. He was sorry for what he had done, and he became a true follower of St. Raymond.St. Raymond was one hundred years old at the time of his death. At the request of his superiors Raymond published the Summa Casuum, of which several editions appeared in the sixteenth and seventeenth centuries. In 1229 Raymond was appointed theologian and penitentiary to the Cardinal Archbishop of Sabina, John of Abbeville, and was summoned to Rome in 1230 by Gregory IX, who appointed him chaplain and grand penitentiary. The reputation of the saint for juridical science decided the pope to employ Raymond of Peñafort's talents in re-arranging and codifying the canons of the Church. He had to rewrite and condense decrees that had been multiplying for centuries, and which were contained in some twelve or fourteen collections already existing. We learn from a Bull of Gregory IX to the Universities of Paris and Bologna that many of the decrees in the collections were but repetitions of ones issued before, many contradicted what had been determined in previous decrees, and many on account of their great length led to endless confusion, while others had never been embodied in any collection and were of uncertain authority. The pope announced the new publication in a Bull directed to the doctors and students of Paris and Bologna in 1231, and commanded that the work of St. Raymond alone should be considered authoritative, and should alone be used in the schools. When Raymond completed his work the pope appointed him Archbishop of Tarragona, but the saint declined the honour. Having edited the Decretals he returned to Spain. He was not allowed to remain long in seclusion, as he was elected General of the Order in 1238; but he resigned two years later. During his tenure of office he published a revised edition of the Dominican Constitutions, and it was at his request that St. Thomas wrote the Summa Contra Gentiles. St. Raymond was canonized by Clement VIII in 1601. His Summa de Poenitentia et Matrimonio is said to be the first work of its kind. His feast is 23 January. Edited from The Catholic Encyclopedia