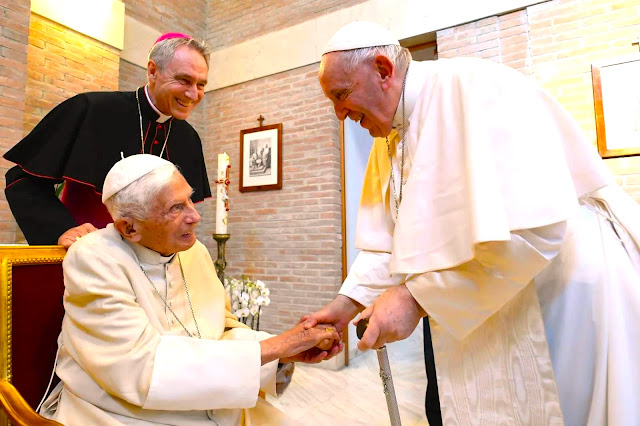 Pope Emeritus Benedict XVI's funeral will be very simple with only two official delegations—one from Germany and one from Italy. Pope Francis will preside over the funeral. Thus, US President Joe Biden will not attend; but he will be represented by the US ambassador to the Holy See. This simpler procedure was as requested by Pope Emeritus Benedict XVI himself.
Nevertheless, many heads of state will come to the Mass to pay their respects.

These include (not a complete list): Spanish Queen Sofia and the Minister of the Presidency, Belgian King Philippe, Polish President Andrzej Duda, the Portuguese President and the French Minister of the Interior.
Hungary will be represented by its president, Katalin Novak. Prime Minister Viktor Orbán was among the first to go to St. Peter's Basilica to bid farewell to the Pope Emeritus. Italian President Sergio Mattarella and Italian Prime Minister Georgia Meloni also visited the Basilica Monday morning. President Mattarella will also be at the funeral.
From Germany, President Frank-Walter Steinmeier, Chancellor Olaf Scholz and the Governor of Bavaria will also attend.
The diplomatic corps to the Holy See is also invited and will occupy a special place in St. Peter's Square near the tabernacle.

According to CNS, the Funeral Mass for Pope Benedict XVI will be based on a papal funeral. Since Pope Benedict XVI resigned as pope in 2013, the funeral rites for a deceased pope needed to be adjusted a bit. The Vatican published the Mass booklet for the funeral January 3rd and the Vatican press office explained what the January 5th funeral will look like.
The changes accommodate the fact that he was not the reigning pope and has not left behind a "sede vacante."
"The liturgical celebration follows the model of a funeral service for a supreme pontiff, broadly speaking," Matteo Bruni, director of the Vatican press office, told reporters on January 3rd.
While based on a traditional papal funeral, he said, it will have "some new elements that give the rite its originality and some missing elements, which are those that are more pertinent to a reigning pontiff."
For example, there are no final prayers offered by representatives of the Diocese of Rome and of the Eastern Catholic churches, since those prayers are specific to the death of a reigning pope, who is bishop of the Diocese of Rome and is in communion with the leaders of the Eastern-rite churches.
Bruni spoke to reporters in the Vatican press office after the booklet for the funeral Mass was published by the Office for the Liturgical Celebrations of the Supreme Pontiff.
The Mass booklet features a color reproduction of Caravaggio's "Deposition" or entombment of Christ -- a 17th-century masterpiece housed in the Vatican Museums.
Some differences can be seen in some of the prayers and the readings, Bruni said.
The first reading will be taken from the Book of Isaiah (29:16-19) in which the Lord says there will be a day when the deaf will hear the words of a scroll "and, after gloom and darkness, the eyes of the blind will see. But the lowly will rejoice in the Lord even more and the poorest exult in the Holy One of Israel."
In comparison, the first reading at St. John Paul II's funeral Mass was "Peter's Speech" from the Acts of the Apostles (10:34-43), which speaks of the apostles' mandate to preach and testify that everyone who believes in Christ "will receive forgiveness of sins through his name."
The second reading for the Jan. 5 Mass is from the first letter of St. Peter (1:3-9) which praises God's mercy giving the faithful "a new birth" as his children and "by raising Jesus Christ from the dead, so that we have a sure hope and the promise" of eternal life in heaven.
The second reading at St. John Paul's funeral was from the letter of St. Paul to the Philippians (3:20-4:1) about the faithful's "citizenship in heaven."
The Gospel reading for Pope Benedict's funeral Mass was to be from St. Luke's account of Jesus' final moments on the cross and telling the "good thief" who recognized him as the Christ, "today you will be with me in paradise." The Gospel reading for St. John Paul's funeral Mass was from John (21: 15-19) when Jesus told Peter to feed his sheep.
The only other notable changes are in the prayers of the faithful. They include petitions for "Pope Emeritus Benedict, who has fallen asleep in the Lord: may the eternal Shepherd receive him into his kingdom of light and peace," followed by a prayer "for our Holy Father, Pope Francis, and for all the pastors of the church: may they proclaim fearlessly, in word and deed, Christ's victory over evil and death."
Pope Benedict had wished his funeral to be simple, Bruni had said, emphasizing it would be "solemn, but sober." Pope Francis will preside over the funeral Mass in St. Peter's Square and Cardinal Giovanni Battista Re, dean of the College of Cardinals, will be the main celebrant at the altar.
Some traditions connected with the death and burial of a pope will be followed, Bruni said, such as three objects being deposited in the pope's casket before he is buried: his palliums, coins and medals minted during his pontificate, and a "rogito" or scroll that summarizes in Latin the highlights of his papacy.
Responding to questions about whether Pope Benedict XVI would be buried with a pastoral staff or a papal ferula, which is a staff topped with a cross, Bruni said the ferula is only held by a reigning pope and that no pope is ever buried with either item.
After public viewing of his body ends the evening of January 4th, Pope Benedict will be placed in a traditional cypress casket, following a traditional ritual, Bruni said.
Before the funeral, the casket will be carried into St. Peter's Square and the faithful will be asked to join the recitation of the rosary before Mass.
After the funeral, again following tradition, the casket will be sealed and wrapped with ribbons, then it will be placed inside a zinc casket that will be soldered and sealed, and then that will be placed inside a casket made of wood.
The moment of his burial in the grotto of St. Peter's Basilica, where other popes are buried, will be private, Bruni said.
Sources USCCB/CNS + Romereports