Top 10 Quotes by Pope Benedict XVI on the Eucharist - Help You to Focus Your Life on God! 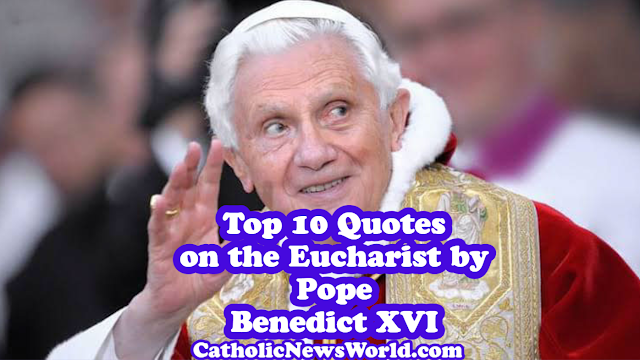 1. An authentically eucharistic Church is a missionary Church... Truly, nothing is more beautiful than to know Christ and to make him known to others.
2. In a world where there is so much noise, so much bewilderment, there is a need for silent adoration of Jesus concealed in the Host. Be assiduous in the prayer of adoration and teach it to the faithful. It is a source of comfort and light, particularly to those who are suffering. (Address by the Holy Father during pastoral visit of His Holiness Pope Benedict XVI in Poland at the meeting with the clergy, w2.vatican.va. May 25, 2006.)
3. The happiness you have a right to enjoy has a name and a face: it is Jesus of Nazareth, hidden in the Eucharist. (Pope Benedict XVI (2006). “God's Revolution: World Youth Day and Other Cologne Talks”, p.34, Ignatius Press)
4. Without the Eucharist, the Church simply does not exist.
5. The more ardent the love for the Eucharist in the hearts of the Christian people, the more clearly will they recognize the goal of all mission: to bring Christ to others. Not just a theory or a way of life inspired by Christ, but the gift of his very person. Anyone who has not shared the truth of love with his brothers and sisters has not yet given enough.
6. In the Eucharist, the Son of God comes to meet us and desires to become one with us; eucharistic adoration is simply the natural consequence of the eucharistic celebration, which is itself the Church's supreme act of adoration. (Alcuin Reid, Pope Benedict XVI (2012). “From Eucharistic Adoration to Evangelization”, p.81, A&C Black)
7. Receiving the Eucharist means adoring Him whom we receive. Only in this way do we become one with Him, and are given, as it were, a foretaste of the beauty of the heavenly liturgy. The act of adoration outside Mass prolongs and intensifies all that takes place during the liturgical celebration itself. (Alcuin Reid, Pope Benedict XVI (2012). “From Eucharistic Adoration to Evangelization”, p.81, A&C Black)
8. Friends, do not be afraid of silence or stillness. Listen to God. Adore Him in the Eucharist.  (Pope Benedict XVI (2008). “Pope Benedict in America: The Full Texts of Papal Talks Given During His Apostolic Visit to the United States”, p.84, Ignatius Press) 9. With the Eucharist, therefore, heaven comes down to earth, the tomorrow of God descends into the present and it is as if time remains embraced by divine eternity.
10. The Eucharistic sacrifice of the body and blood of Christ embraces in turn the mystery of our Lord's continuing passion in the members of his mystical body, the church in every age. (Sermon of Benedict XVI, w2.vatican.va. September 18, 2010.)
BONUS Quote: 11. We cannot live, we cannot look at the truth about ourselves without letting ourselves be looked at and generated by Christ in daily Eucharistic Adoration.

Anonymous said…
Thank You for these words and the Eucharist is body of Christ Jesus!!!
We pray whoever believes in abortion murder !ones who condone it pass laws ! I pray as what was done to Pelosi “ No Eucharist amen .
I also pray and believe others who condone it !
Judges politicians atheist believers which attend church to watch like demons !
As saints Pio said the rosary is our weapon in these time ?!
I pray for Pope Emeritus and May be rest in PEACE 🙏
January 6, 2023 at 10:48 PM