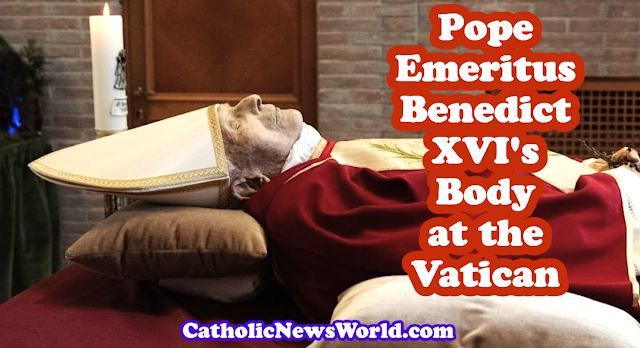 The body of the late Benedict XVI. was laid out in the house chapel of his residence "Mater Ecclesiae" in the Vatican Gardens.

A candle with the image of the Mother of God of Altötting is placed next to the corpse, on the other side a Christmas tree.

Yesterday morning, Francis went to the Monastery a few minutes after 9.34, the time of his death, confirmed today the director of the Vatican Press Office, Matteo Bruni, explaining that, immediately after being warned by the personal secretary, Monsignor Georg Gänswein, the Pope reached the Mater Ecclesiae by car around 10 am. He had already done so last Wednesday 28 December, immediately after having alerted the world to the worsening of Ratzinger's health conditions, asking for "a special prayer" for him.

In the course of Sunday more visitors would have arrived. Above all, former close employees and people who were personally connected to the deceased paid their last respects to the deceased. Among them were some cardinals.

From his last residence, where he lived since 2013, the body of Benedict XVI. transferred to St. Peter's Basilica on Monday, where believers can say goodbye to him until Wednesday. According to the Roman authorities, around 30-35,000 visitors are expected every day, at normal times around 20,000 people push their way through the papal basilica. According to official estimates, around 50-60,000 people will attend the funeral mass.

The retired Pope from Germany died on Saturday morning at the age of 95. Since retiring from the papacy in 2013, Benedict has lived in seclusion in the former monastery building in the Vatican Gardens.