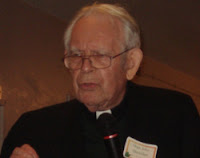 CNA report: After a severe car accident last month that killed a religious sister and injured U.S. Ambassador to Malta Doug Kmiec in California, the third passenger – Msgr. John Sheridan who was in critical condition – has died at the age of 94.
On Aug. 25, Ambassador Kmiec, retired pastor of Our Lady of Malibu Msgr. John Sheridan, and Sister Mary Campbell were involved in a one car collision at Mulholland Highway and Malibu Canyon Road.
Sr. Mary Campbell, 74, died at the scene.
The Malibu Times reported that Msgr. Sheridan, who had been critical condition following the accident, died early in the morning on Sept. 17 from heart failure.
"We all are very saddened," OLM Parish Manager Peggy Thomas told the Malibu Times, which noted that there will be a prayer service at the parish this evening.
After surgeries at the UCLA Medical Center Trauma Center following the collision last month, Ambassador Kmiec was reported to be in good condition and improving.
California Highway Patrol Officer Leland Tang said Ambassador Kmiec was driving westbound on Mullholland on Aug. 25 when his 2009 Hyundai Accent crashed into a drainage ditch after veering off the road. Tang said that the cause of Kmiec losing control of the vehicle is unknown.
Authorities have said the accident remains under investigation and that dashboard control adjustment may have been a factor in the collision.
http://www.catholicnewsagency.com/news/malibu-pastor-emeritus-passes-away-after-car-accident/
Posted by Jesus Caritas Est at 9:04 PM