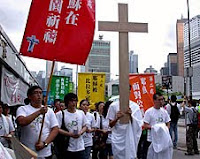 UCAN report:
A Hong Kong Church commission says it will hold a rally to pray for religious freedom in mainland China even though its request to use a public playground has been turned down.
The Justice and Peace Commission (JPC) had applied to the Leisure and Cultural Service Department (LCSD) to use the Lockhart Road Playground as the starting point for its outdoor Way of the Cross, said JPC project officer Or Yan-yan.
The event, to be held on Oct. 16, a public holiday, is to pray for religious freedom in China and the release of detained clergy there.
The JPC received confirmation from the LCSD on Sept. 21 that the playground would be available and the officer even reminded them to buy insurance for the activity.
However, on Sept. 27, the LCSD said the request was rejected as the activity was “politically sensitive,” said Or.
After a local newspaper queried LCSD about the matter, Or said she received another call from the department saying that groups intending to use the playground for recreation are given priority.
“We strongly protest such an act of self-censorship,” Or said. The JPC has written to the LCSD for a formal explanation but has received no reply so far, she added.
Or said the commission will stick to its plan for the rally as the police have approved the rally route and will cordon off several streets.
The Way of the Cross will start at the playground and seven of its stations will be at public places such as the High Court, the Court of Final Appeal and government headquarters.
Cardinal Joseph Zen Ze-kiun, retired bishop of Hong Kong, is scheduled to speak at a prayer meeting after the Way of the Cross ends at a Catholic school.
The government department’s rejection of the commission’s request is apparently not an isolated case, said Or.
In June, another government department confiscated two statues dedicated to victims of the 1989 Tiananmen Incident, which were erected outside a shopping mall.
http://www.ucanews.com/2010/09/29/church-group-defies-govt-objection-to-rally-site/
Posted by Jesus Caritas Est at 3:35 PM