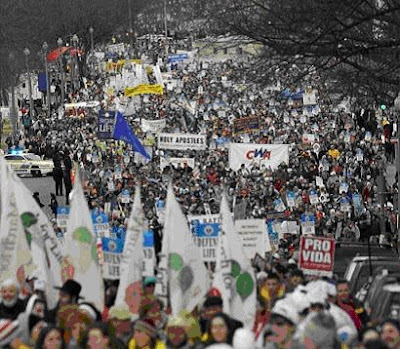 BY: Miriam Westen
Over 500,000 attended the MARCH FOR LIFE 2012 in Washington, DC on Sun. Jan. 22. This massive crowd gathered to honor life from conception to natural death. It is hoped that the legislation will soon be changed to end abortion in the US. They marked the 39th Anniversary of Roe vs. Wade. (IMAGE SOURCE: http://mcitl.blogspot.com/) This court decision made abortion legal in the USA in 1973. Since that time over 54 million abortions have occurred in the USA. According to the EWTN news service the attendence number of the crowd was confirmed by police. There was an overnight prayer vigil in the Basilica of the National Shrine of the Immaculate Conception with thousands in attendance. Cardinal-designate Timothy Dolan, President of the US Conference of Catholic Bishops provided the homily during the Mass. This annual March has become a large event spanning many days and involving talks, demonstrations, prayer, videos and other activities. Many politicians, clergy, religious, youth and leaders partke every year. Martin Luther King's niece Dr. Alveda King also attended and is part of a large movement in support of life. Last year over 400,000 attended. This year noted a particularly strong youth presence. One Catholic College, Christendom cancelled classes so that the entire school could attend.
The West Coast organized a similar event for the 8th time which gathered over 40, 000 this year. 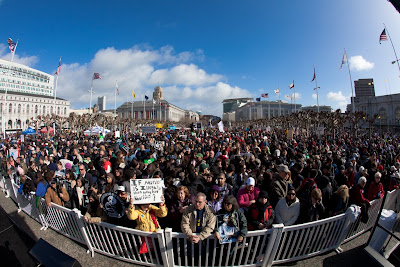 Before the rally. On Jan. 21 the crowds came to San Francisco. This March began with a Mass in St. Mary’s Cathedral with Archbishop George Niederauer presided.  (video/image source http://walkforlifewc.blogspot.com/search/label/2012%20Walk%20Photos) VIDEO from 2011West Coast: