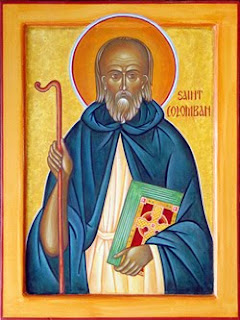 This great missionary abbot founded monastic centers in France, Switzerland, and Italy that became centers of evangelization and learning for the whole area. He was a monk of the monastery of Bangor in north Ireland, founded by St. Comgall, one of the notable monastic founders of Ireland.
At Bangor, sanctity and scholarship were prized, and St. Columban became a teacher in the monastic school there. He was born in Leinster, and after a youthful struggle he lived at Cluain Inis for a time. After thirty years at Bangor, he received Comgall's permission to spread the Gospel on the continent of Europe, and taking twelve companions with him he settled in Gaul where the devastation of the barbarian invasions had completely disrupted civil and religious life. Invited by the Merovingian King Childebert, he founded a monastic center in Burgundy at Annegray and two others at Luxeuil and Fontaines. From these three monasteries over two hundred foundations were made, and Columban composed for these monasteries two monastic rules.
With the zeal of a prophet, he attacked the immoral court life of the Merovingian kings, the lax local clergy, and introduced to the continent the Irish penitential system, which became the basis for private confession. Reproving a local king for his immoral life, Columban was expelled from Burgundy, traversed France and Germany, leaving disciples behind to found monasteries, and crossed the Alps to found his most famous monastery at Bobbio in Italy.
He was a firm opponent of Arianism, wrote letters to popes on the religious issues of the day, and left a legacy of writings that deeply influenced the monasticism that came after him.
He impressed his contemporaries as a giant of a man in mind and spirit, who revived religion on the continent and prepared the way for the Carolingian renaissance. He died at Bobbio on November 23, 615, and is buried in the crypt of St. Columban's Church there.
SOURCE http://www.ewtn.com/saintsHoly/saints/C/stcolumban.asp
Posted by Jesus Caritas Est at 10:40 AM